Sometimes things take a little longer. However, “sometimes” is a bit of an understatement when it comes to this studio. It seems every project I ever planned took at least twice as long as expected. The skillshare class which I recently finished (and proudly presented here) took me one week to plan, one week to film, and after a couple of days of editing, I filmed almost everything again and that took me another week. As you might imagine, that resulted in a lot of cut-out scenes. Here are some of them:

And although I am used to projects taking a little longer, the making of 346 really has taken up enough time for now if you ask me. Well, last Sunday I came a little bit closer to the finishing line: 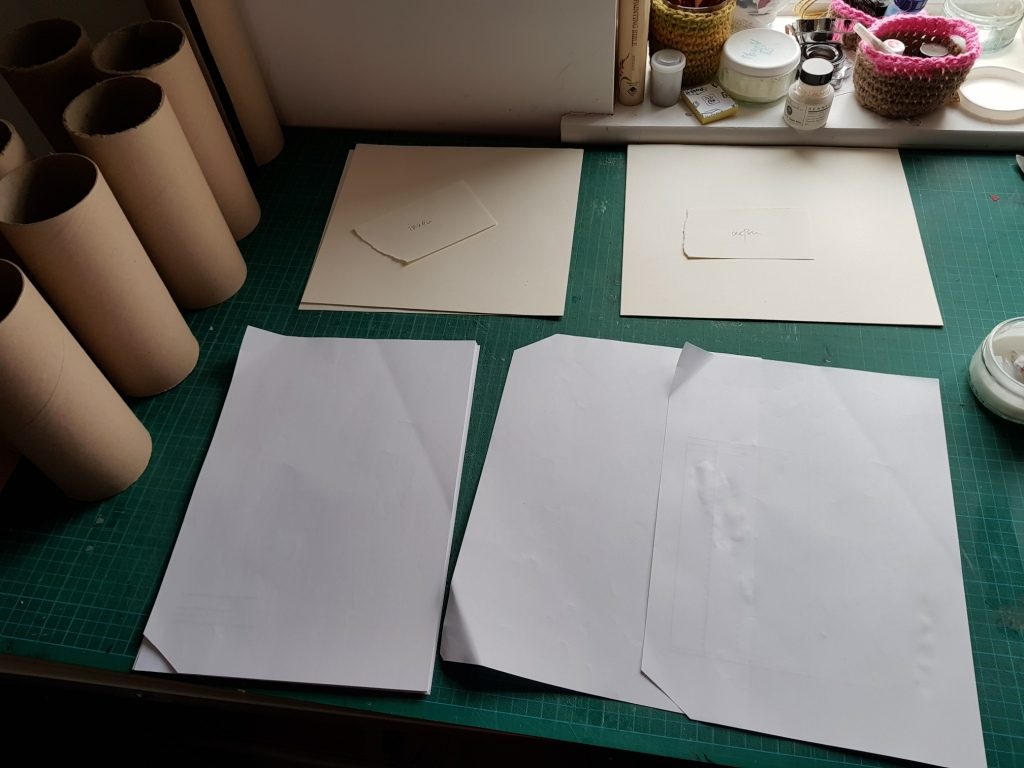 The scrolls will sit in cardboard tubes which on the one hand of course protect the rolled up scroll but also hide how much paper is still left to read. I want to line them inward and outward for various reasons. On the outside it needs a lighter lining, as the dark cardboard would make the covering fabric I want to put on later appear grey.
I need to line it on the inside to couteract the pull of the outer material. With the caps in place, it might not deform right away, however, the pull would be there nevertheless, and I fear it could destroy the tubes mid-term. Also putting an archival paper as a lining doesn’t really negate the effect of the acidity in the tube, but it does lessen it.

The tubes will also have to be cut at one point. The slit is where the paper will go through so that the scroll can be read. The question was whether to cut the tube open first, before lining. Or rather after lining. Both has its advantages, and I decided for most of them to line first. (Just one of them was cut open before). So above you see how I have cut pieces of paper for inside and outside lining, and everything is set up for me to get to work. 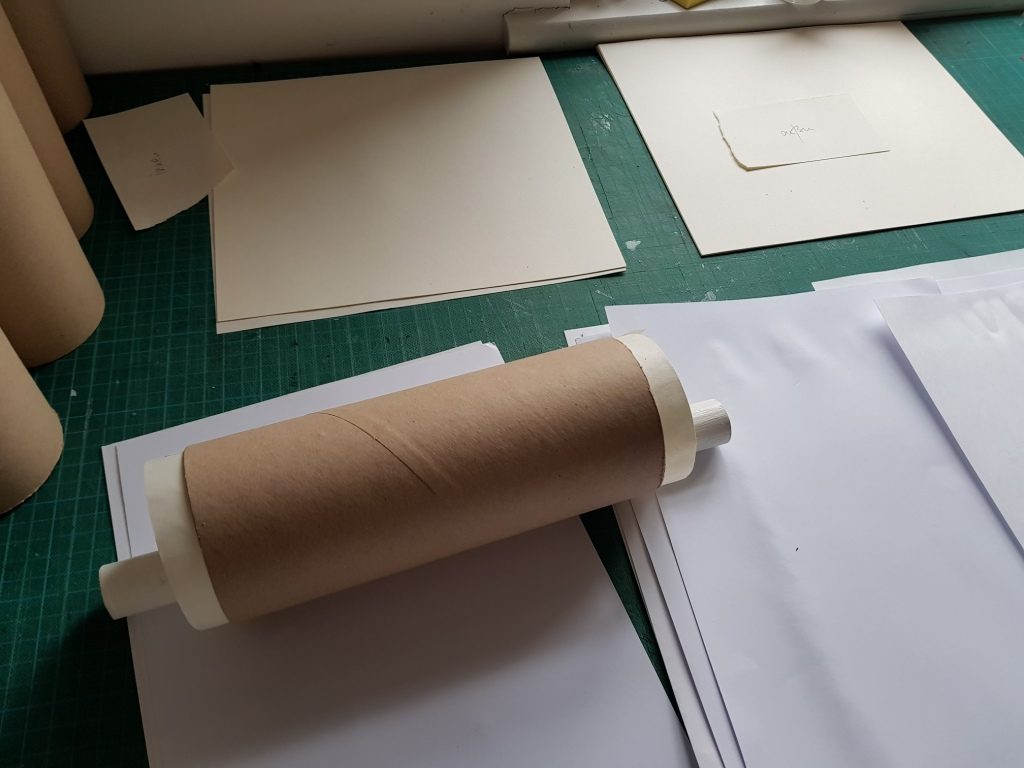 Lining the tubes on the inside proved incredibly difficult. Of course the paper overlaps a little on the inside, but even if it didn’t, you’d have to roll it up fairly tight to feed it through the tube, and then it stuck to itself, even when I tried to be really careful. I used one extra dowel I have to press down some paper while having a hand free to hold on to the top. Luckily the diameter of 8cm is enough for me to fit my hand inside, otherwise I wouldn’t know how I could have rubbed it on so that there are fewer air bubbles. 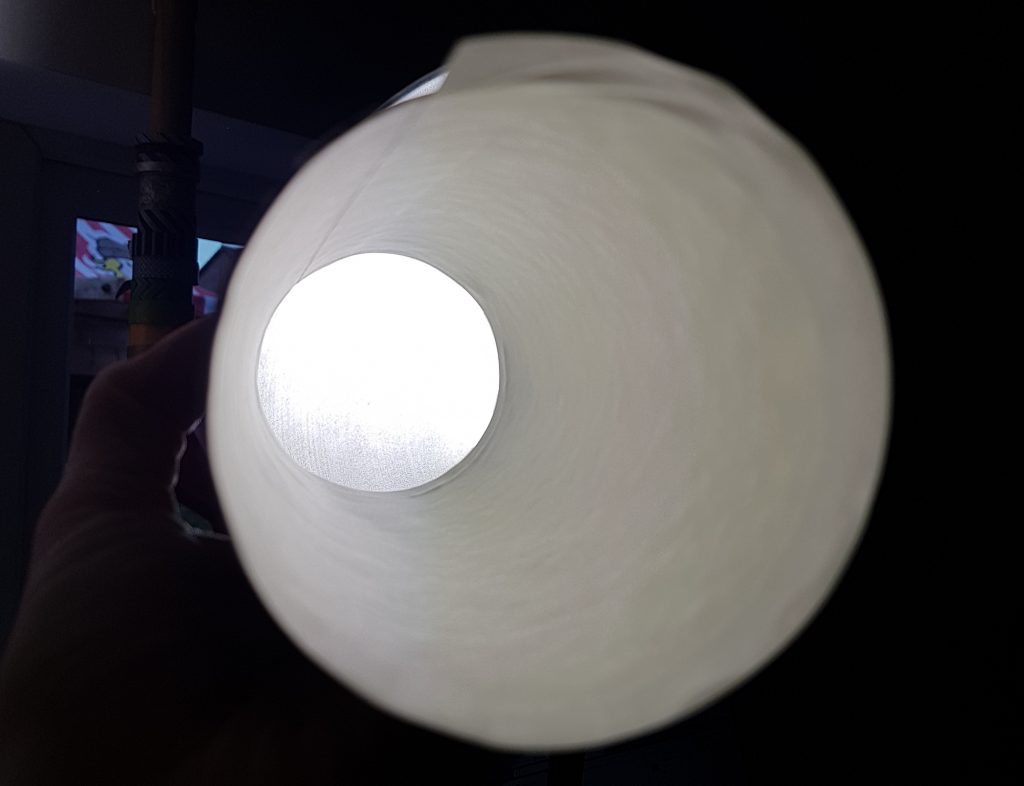 By tube 6 I had finally figured out how to roll of the paper and rub it on so that there was no more glue on the inside. Phew! The secret is to fold it up like this: 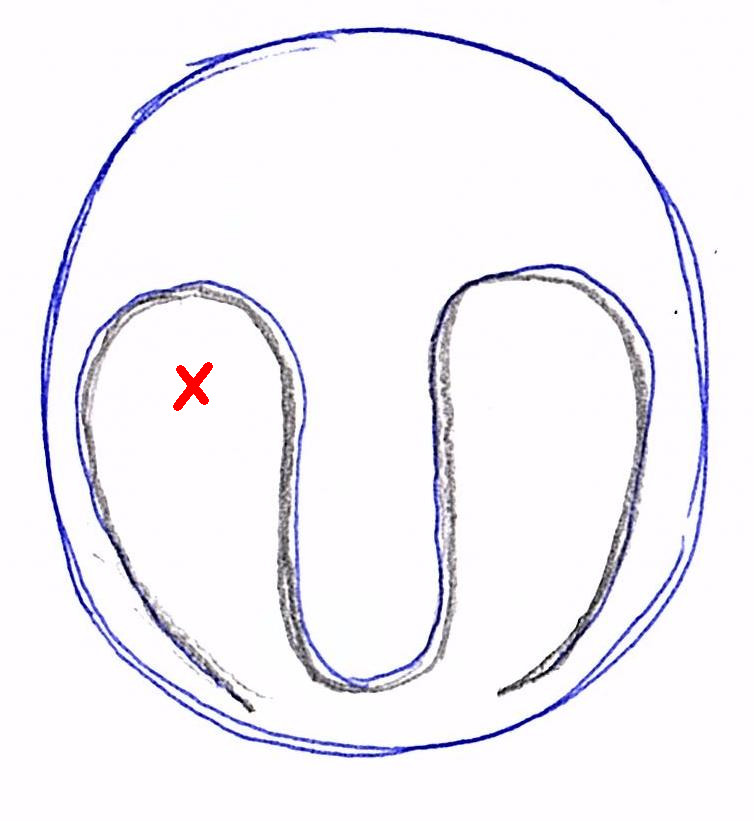 Where the grey line indicates the paper (and the blue lines the cardboard tube and the glue on the paper). Then insert the dowel where the red x is, and carefully start rubbing down toward the middle (not the edge). 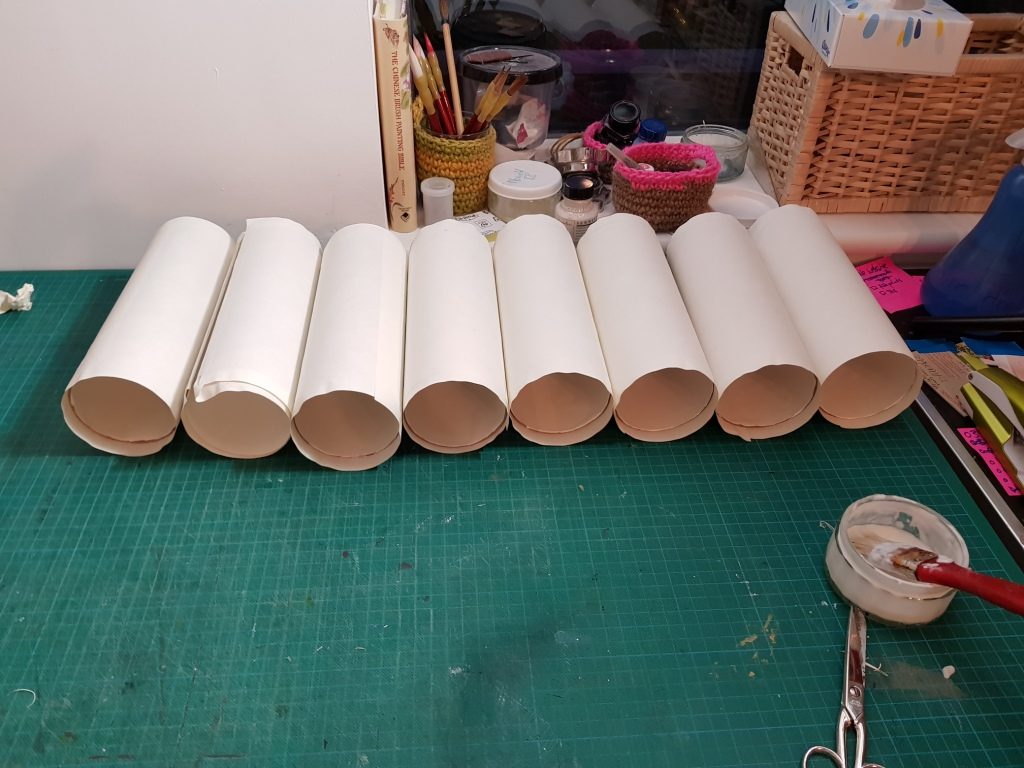 Once the inside was covered and the glue dried, I trimmed off the excess paper with some scissors and then covered the outside. 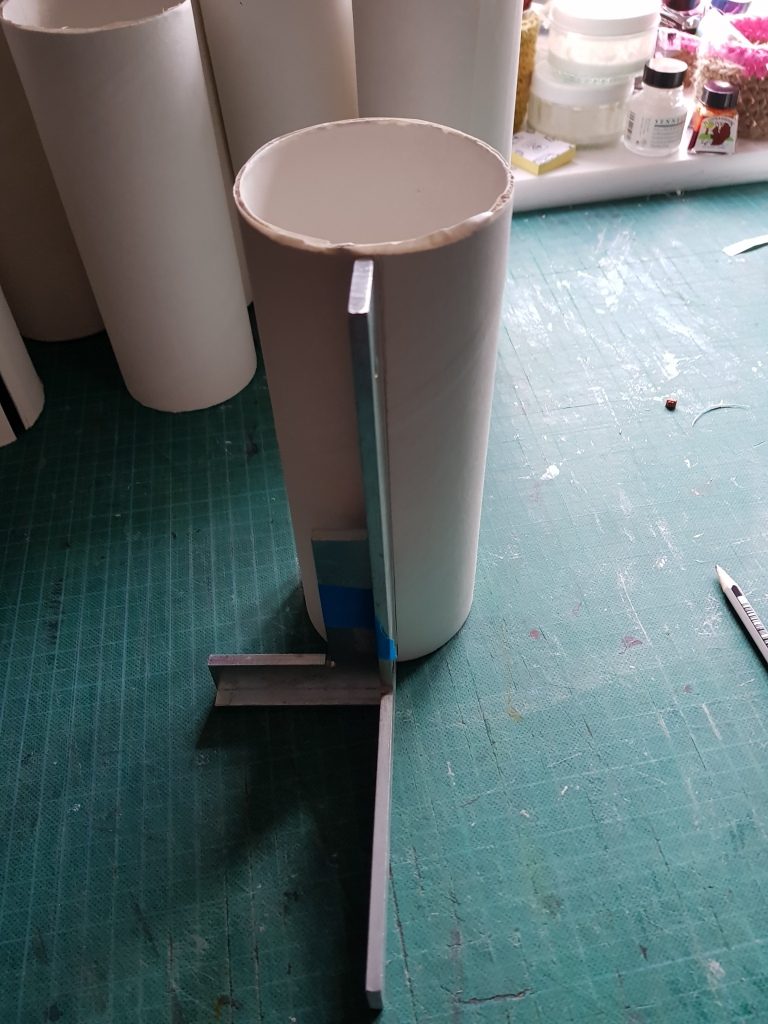 The next step then was to cut the slid into the tube. – Or maybe add the cap first? I was undecided and did both on a couple of tubes. I think in the end it doesn’t matter that much. Look what an awesome tool I crafted from two squares and tape to make a 3D square. 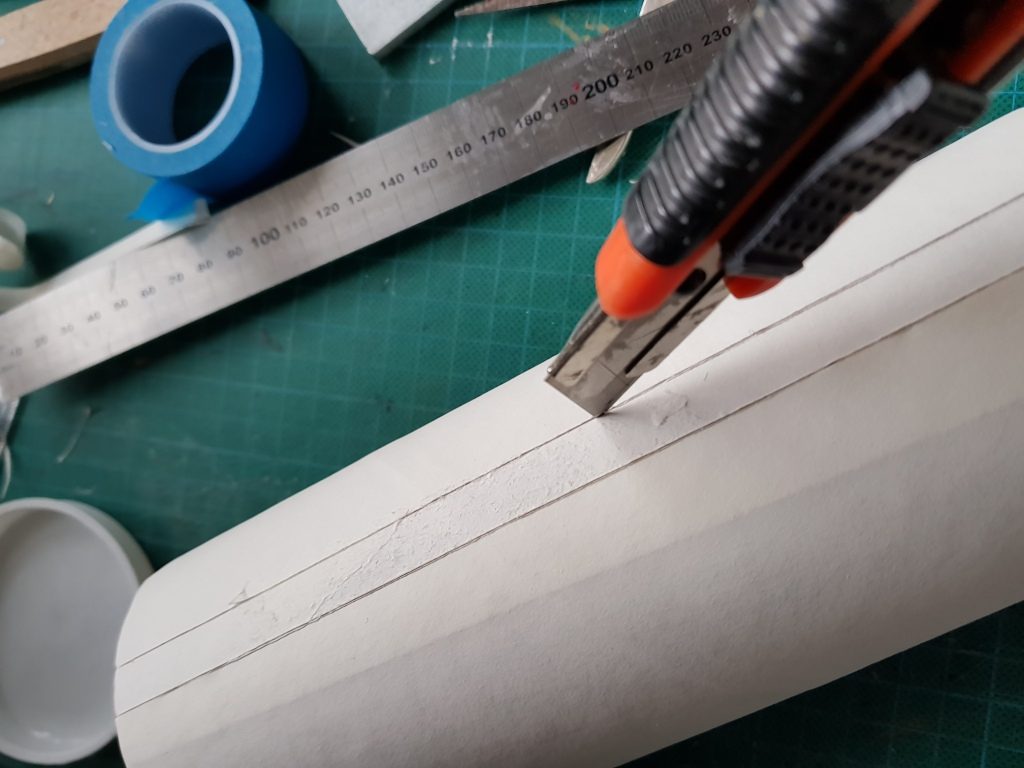 The cutting is less straight-forward than I thought. It’s not so easy to balance a straight edge on top of a tube, and the safest way was to scrore both lines and then cut without a ruler. The point when the knife goes through the most inward layer is a little bit tricky, and in some cases the lining paper came slightly loose. But that was easy enough to fix. 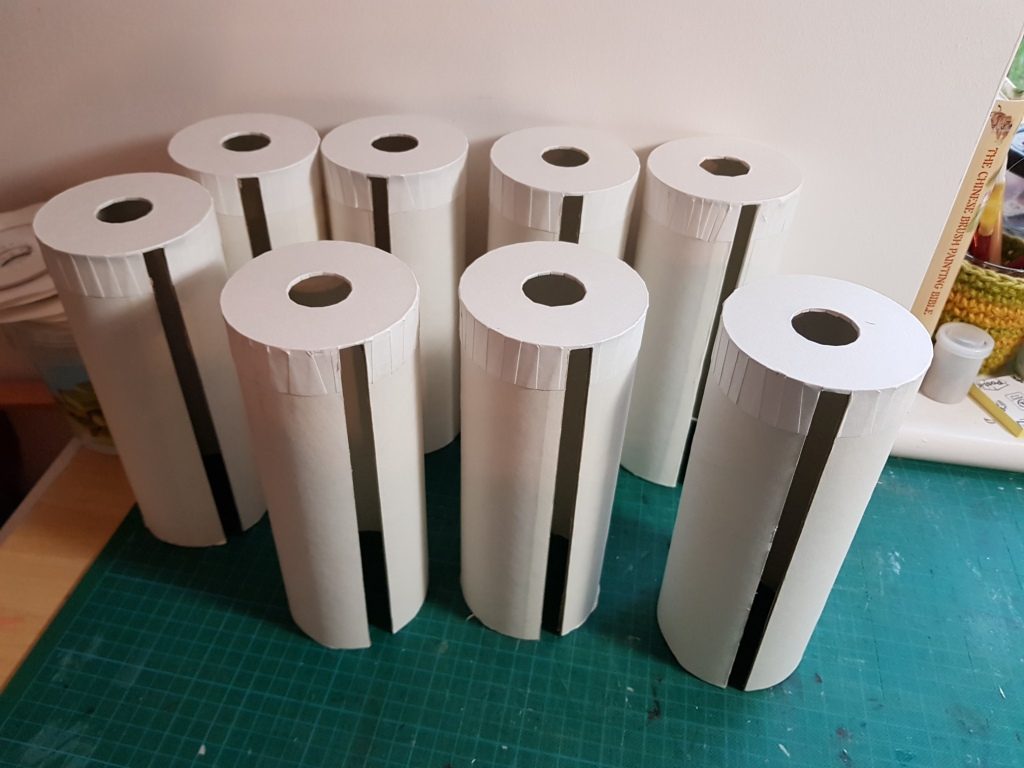 Then finally the first cap was added to them all. Next I want to insert the scroll, add the second cap, and then add the cover. However, on the 7 tubes which were slit open after covering there are still some raw edges to cover: 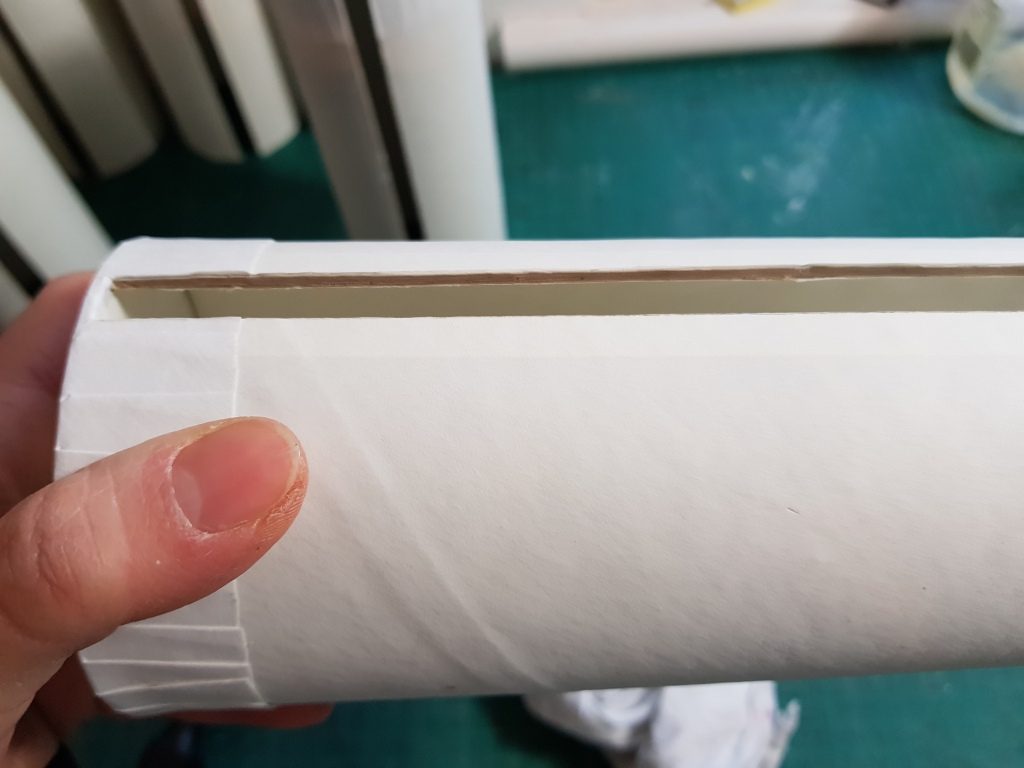 Thus I am planning to add a strip of fabric to both edges before inserting the scroll.

For the first scroll I made, the cover was hand-drawn. This time, I am going to draw the image one more time on paper, scan, and then print on fabric. Sounds like I am almost there, don’t you think