A month ago I sent the first copy of 346 to London to the Society of Bookbinders’ Competition. Since then I have not been idle. I am making this an edition of 10. The first two copies come with the model and are printed on handmade Dosabiki Masa Shi paper. Copies 2-10 are printed on machine made Masa paper, and will sit in a case just like the first two, but that’s it, no bigger box from which the scroll box can be taken, no model. Still also these scrolls need making, and that’s what I started with right away.

Like always, it took me longer than I expected it would. I put writing this post off until “tomorrow” several times, thinking that tomorrow I could probably show you more finished results. Well, here is some work in progress: 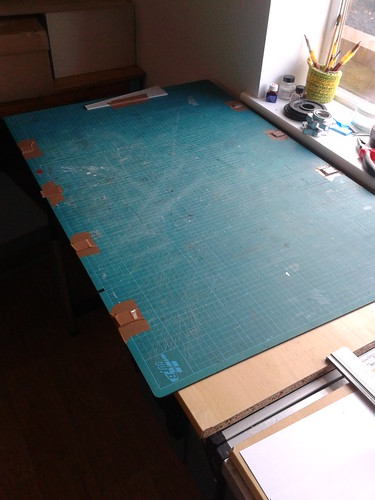 If you have ever done any editioning, then you know what this is: A cutting jig. I needed to cut down large sheets of paper to make strips which I would then glue together for the scrolls.

Jigs are a really great thing for editioning. They save you measuring the same thing over and over again. This is my jig for attaching the very first piece of scroll to the dowel: 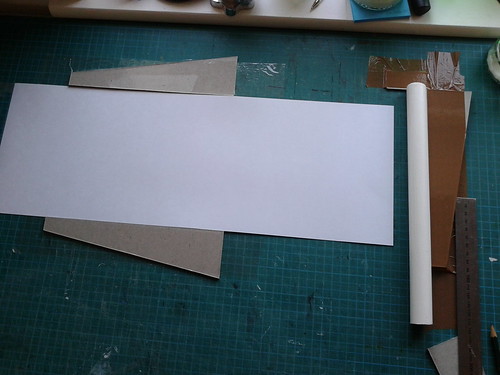 And after a slight modification I turned it into a jig for joining pieces of scroll together: 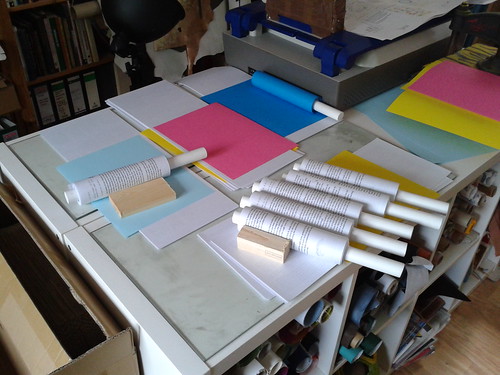 In the photo above you see various scrolls in different states of being done: coloured sheets on top of the printed pieces of scroll indicated how far progressed the work was. By now the scrolls are all done. The tubes for the round scroll case is cut to size. Next they need lining and capping. Instead I decided to make the boxes first, because then it will be easier to store the unfinished scrolls away without fearing they might be smudged. Unfortunately I forgot to take photos of that work. Instead I show you this other photo I took. I don’t know what  had in mind when I took it. But you can see a detail of how the scroll looks like, and on the left hand side you can see how the seams look like. 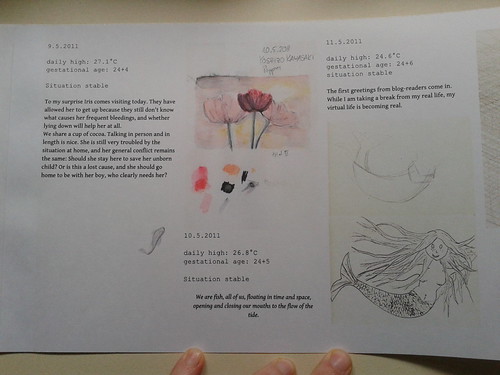 Just to prove that mine is the best husband in the world: This is the kind of food I get served when I am working on a weekend and therefore don’t help with entertaining the kids. – Yummy!

But still it seems I am just not good at sticking with this kind of editioning work. And I soon got distracted. For the Dosabiki scrolls, I had to cut off the deckle edges of the paper. I saved them, and then rolled them up to form a paper cord. The ball of paper grew bigger and bigger, as I rolled and formed while waiting for scroll pieces to dry. I was, and still am, going to crochet it into a bowl. My first thought was to use this as a trial. Maybe in the future I would do this with non-blank paper, or maybe write on the bowl in some way? Now that I looked at the ball day after day, I suddenly had a different idea:

I don’t know why and how exactly the idea formed. But I thought dripping on ink could have a nice effect. I chose a deep blue and dripped on some ink until it bleed through on the other side. 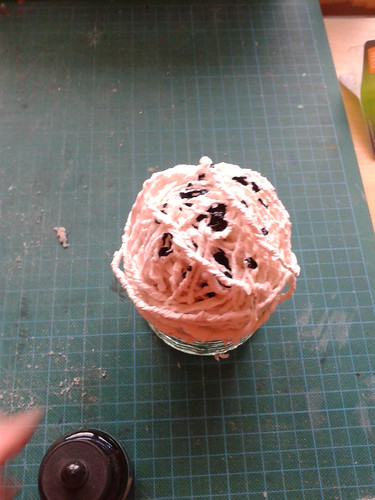 It should be dry soon, and I am looking forward to unrolling the ball and see how it looks on the inside. It took so much ink that I find it hard to imagine it is not completely blue. But then – it doesn’t look like it from the outside…

And then I took a couple of days off this week to print and crochet. We had builders over not long ago, and they left different pieces of timber. I wanted to try some experimental wood cutting with them. One slim piece I found especially interesting. I sanded it down considerably. It had cracks, it seemed to have a lot of character, and so I decided to maybe try a reduction cut with it, or at least print the whole thing as a background first. 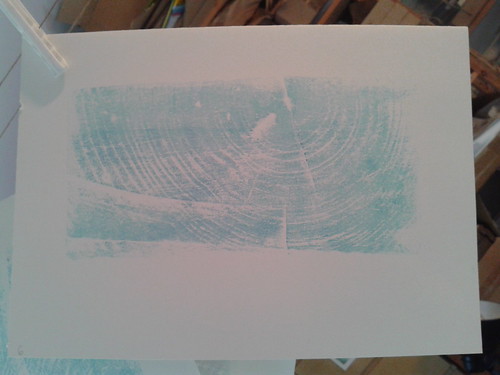 Another thing to look forward to: experimenting and finishing that print. Of course I’ll need to finish those scrolls too, some time. Sigh.

And I also needed teacher appreciation gifts. So that was then a welcome excuse to take another day off:

They are book marks, with the head and the end of the tail (and even the feet in case of the rat) hanging out at the head and tail of the book. I hope they’ll like them! The pattern are from supergurumi – they have a lot of cute and funny designs.

So, I now really should go back to finishing those scroll. Or maybe add another layer to those prints tomorrow?…