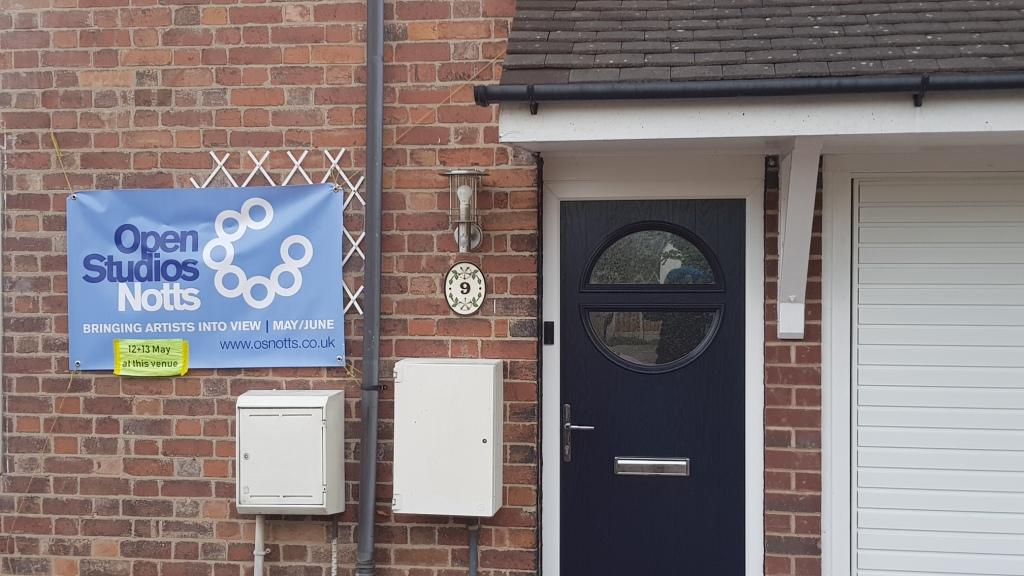 I am participating this year on the Open Studios Notts event. Almost 300 artists in all of Nottinghamshire are openening their studios in May and June. Mine is going to be open to the public on 12/13th May.

That’s in just over a week, and there’s still tons of things to do to prepare for the event. Money that was raised by ourselves (everyone paid a bit into the pot) was used for advertising, of course, but there was enough to pay a professional photographer to take photos of a couple – was it 10? – artists. I was one of the lucky ones chosen. So I had a curious visitor and an exciting photo session a couple of weeks ago. He wanted to see everything and makes photos of a lot of my processes, and so I printed on a screen, and bound a book, and cut some lino, and he made a lot of in-action-shots, and also took a couple of photos of artwork.

These photos are now on display in three libraries in the shire, and in the nearest one, in Beeston, there are also two pieces of work of mine: absences and message in a bottle no. 99 (yes, I made 99 bottles to date, more about that in a minute).

I went to look at the exhibition yesterday, and I must say I was almost disappointed by spotting just one photo of me and my studio there. This one, however, is more than life sized, and I might be a bit frightened by it: 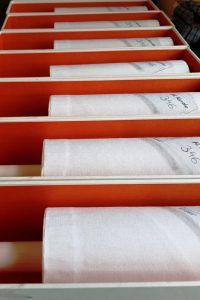 In preparation of the open studio, I finally managed to cover and box all eight 346 scrolls. As you know, the text is about how pregant women are treated and seen in a medical setting in general and particilarly it’s a day by day account of my 7 week hospital stay when I was pregnant with the twins.
The text with illustrations sit on a scroll when can be read by pulling out the paper from the circular box. Thus the time passed can be seen, but the reader cannot guess at how much paper/time is still left until it’s finally over.
I placed these scrolls into boxes, and my initial idea was to add a simple lid to these boxes. But I found first trials much too solid and clumsy, and the scroll itself is already very well protected. The box is more a feature to ease the storage, than to protect the contents. And so I had the idea, of wrapping them in fabric instead, maybe reminiscent of a swaddling cloth. – I am still working on that!

Much of other work I got done was in the spirit of getting ready for the open studio as well. When the catalogue arrived a week or two ago, and I found out that my studio and work was described (probably that was my doing, but I didn’t remember before), with the words: “printmaking, book art, messages in bottles, miniatures”. So I figured, I should make sure, that visitors to my studio are going to see all of that on the Open Day, and so I made a couple of new messages in bottles. You can head over to flaschentiger.wordpress.com to see them all in more detail, here’s a picture with three of them (the fourth was in the picture in the gallery above): 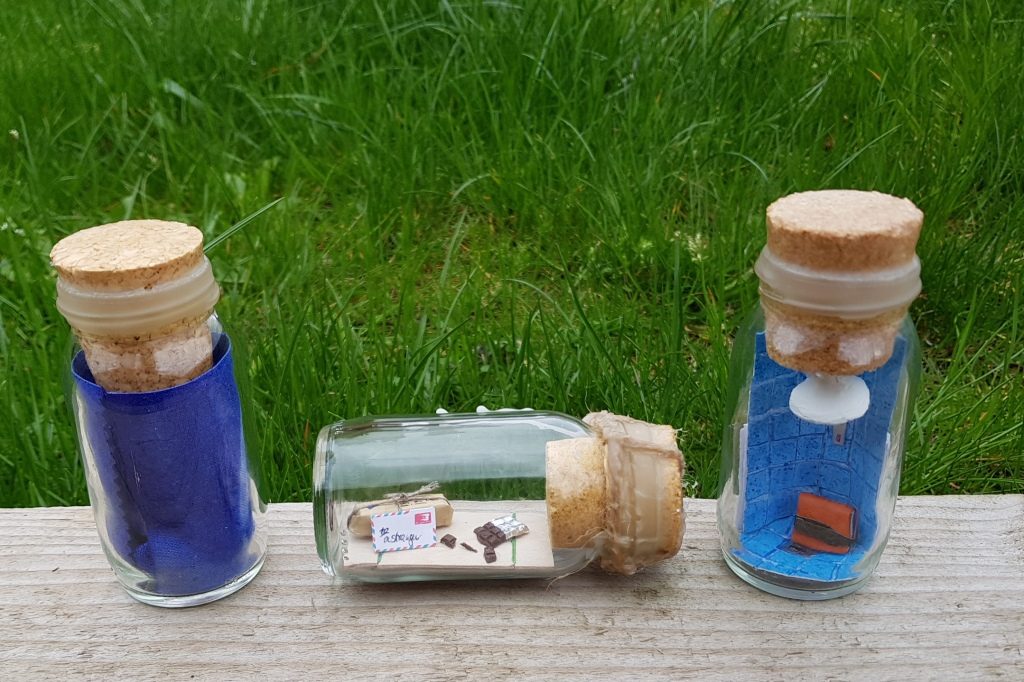 As you can see: there’s miniatures and books and printmaking (on the left that’s a sunprint) so I am covering all my bases with these.

I am very proud and happy how the miniature book in the bottle on the very right came out. It contains a whole story, and I think the binding is sound, too:

Well, and then of course I needed some business cards to go with the artwork into the library, and I decided to print them from hand. (In part because I didn’t manage to get organised in time and get them printed.)
Although this was done in a great rush, I am very, very happy with the results. 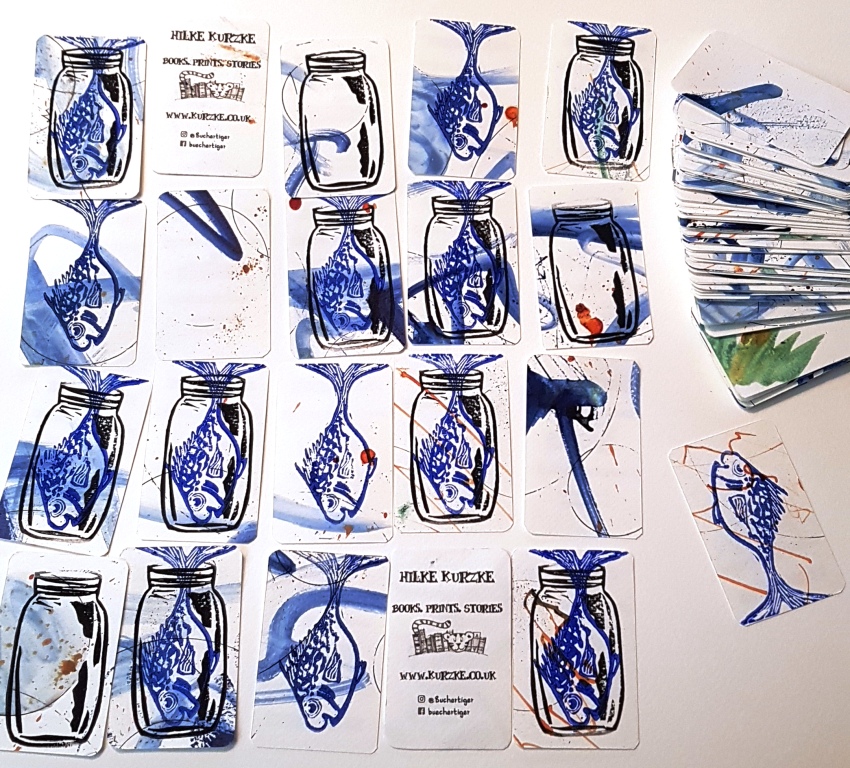 I am in face so happy with the cards and the background, that I prepared a lot more “blank” cards for the planned printing demonstration during the open studio. At the end I had so many beautiful cut-offs that I didn’t want to toss. 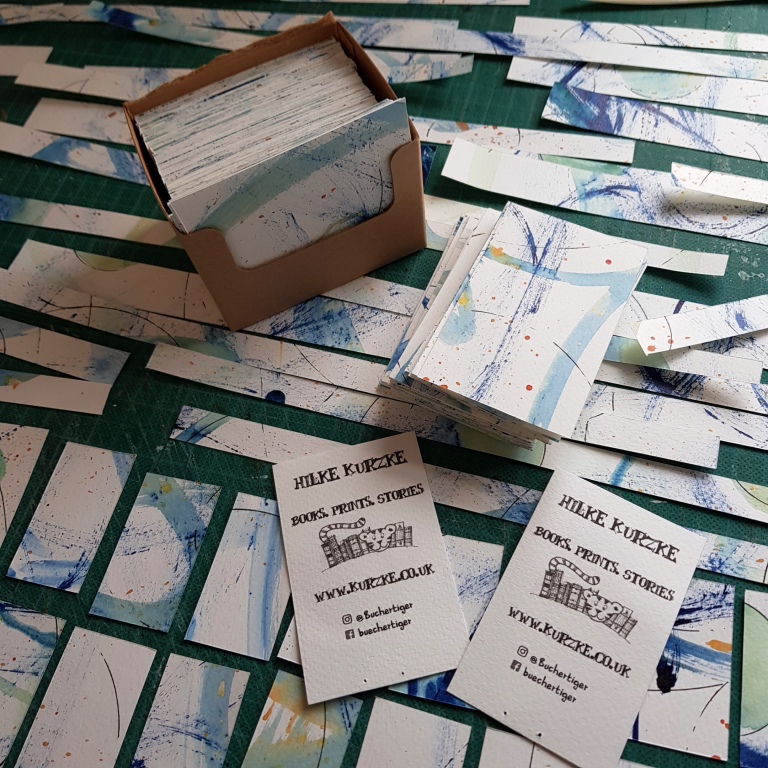 And what do you do with cut-offs that are too beautiful to throw out? – Exactly, you make miniatures (or at least I do):

Of course a lot of other things were and are happening at the same time. Last month I participated for the first time in the “AreYouBookEnough” challenge on instagram which was a lot of fun with a lot of map cutting, but I wasn’t entirely happy with the book I produced in the end, but there were a lot of intersting photos – at least.

Well, I hope I’ll see you not the coming but the next weekend – until then! 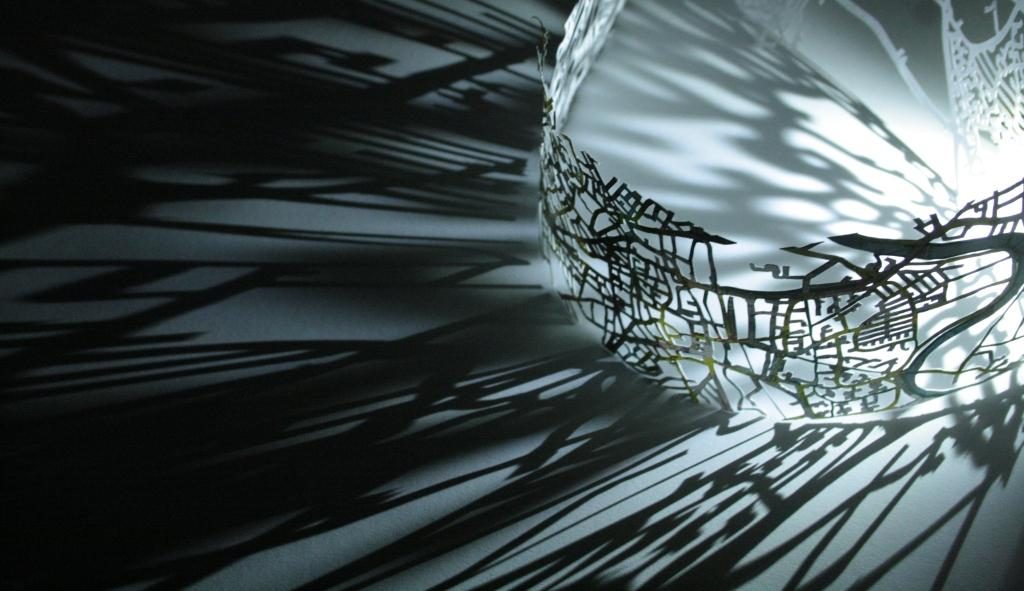 One reply on “Open Studio and 346, finally some Progress, and other News”