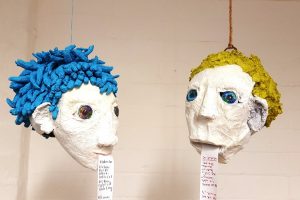 ince my last blogpost I have several works and experiments with paper mache. The fact that it always requires drying time between layers goes well with my often scattered bits of time that I have for making art. On the other hand it also feeds into my tendency to try and do too many different things at the same time. Only time will show which of the myriad things that are resting in half finished states on my worktable will actually end up as finished artwork. And so I decided to just show you some finished pieces for now, rather than a lot of work in progress.

The first piece I want to show you is the “in conversation”, consisting of two paper mache heads and a split scroll, one end of which comes out of each mouth.

Making and drying the hair for the blue haired guy took weeks, the yellow hair only days. – I am learning. The features of both are significantly different, too, as I was experimenting with different techniques to make them.

While I was making the heads, I was also reading up on the difficult topic of human rights, their history, their implementation and implication in international relationships. I believe in human rights, and have become increasingly alarmed by what I think is a misunderstanding of them in public discussion as well as what seems like a decline of their regard in recent years.
I believe that we all have the same basic rights, and that we all have to take the same effort of caring for each other. That being said, after having read and thought about it all for a while, I feel less sure about what to think, and less clear on what I believe human rights encompass than ever before. If you want to follow my path of reading  you could start here. I certainly do not want to lecture on the topic here, I have not read enough, but I also know less than ever before what I really think about it all. I am not happy with all conclusions of the article mentioned above, but I don’t have a good answer either.

In any case, the thinking has trickled into my artwork: What the two heads above say to each other, is a list of basic human rights. Each part of the scroll seperately is illegible although it is English, because each letter has been broken up in parts, and only part of each is on the scroll. The text can be read by superimposition. I made it such, because I want to stress how human rights are something that has to come from a comon consensus among us, the humans.

I took the heads with me to Backlit‘s Open Studios where I was given a table to present some of my work as I am an associate member. The two heads drew a lot of attention and discussion. In the photo above you can see another head (the first I tried) which is spitting out an asemic scroll. I really liked the action of the scroll unrolling, and wound it back and forth countless times during the two hours that evening. I am thinking of whether and how to incorporate a small motor in my next trial, which could release and wind back the scroll in a set pattern.

The other piece I want to show you has the title “sailing”. I think it is probably further from book art than anything I made before, and I feel a bit insecure about it, to be honest. Itconsists of a paper mache bowl, tugged between paper clay branches that are mounted on a piece of wood. Between the branches paper hangs in tatters, and if you look carefully and know what to look for, you can see that the document had the royal coat of arms of the United Kingdom on it. The document that is hanging in shreds there, is the head of the European Communities Act 1972, with which the UK became a member of what was then the EC. I am pretty sure that you wouldn’t be able to tell that it is; it’s hard to verify even after knowing. In the bowl sits a small human figure, wearing a bird’s mask. I wish I had some better photos of it; it’s surprisingly hard to capture well.

Oh, and then of course there are the paper mache eggs. For some of them I layered different coloure paper and then drilled into it was an eletric carving tool. That was rather interesting, and I am currently experimenting with 2D versions of this. If it works out it could result in some interesting book work, I think. I’ll see. 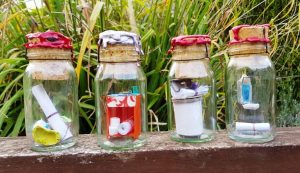 My aim for the next months is to focus more on writing again and hopefully finally finish the first draft on the novel I have been working on for almost two years now. (Hush, hush, I don’t want to say too much yet in case I’ll never finish it.) Those of you who also follow my flaschentiger blog know that I spent a couple of days in Sheffield to write in peace, but I also made and dropped a couple of messages in bottles that week. For one of them I made a minitature book with a pencil closure:

And while we are at the topic of writing:

Some of you might remember that I ran a “Webfinds Wednesday” feature for a while on this blog, and if my webfind was a person I wrote a Followup-Friday interview. At least that was the idea, I managed to write two interviews before this died down: with Judith Hoffman and with  Nina Kaun. And a few might even remember the days when I was responsible of the interviews for Bookbinding Etsy Street Team (The top three interviews are not by me, you’ll always find the author at the end of a post and I published under the name of buechertiger).

I always enjoyed conducting and writing interviews. Writing a blog article about someone I genuinely find interesting is a great excuse to contact someone out of the blue and ask questions shamelessly. I had been thinking of writing another interview for months, if not years (well, ever since Judith’s), but found it hard to find the time that’s involved. But for those of you who enjoy my features, there’s good news: I have a new feature schedule for the next week, so stay tuned!