For the maps that I am currently drawing as part of my “daily” practise I use writing in fake or obscured script here and there. When I looked more closely the other day, it turned out that in fact very few of the maps in Landscapes II do not have some illegible writing here or there.
If this sounds to you like I myself am surprised by this, then this is true.

For my maps I don’t plan. Drawing them is almost like a form of meditation: I look at a page, and just see where this leads me. My hand and wrist automatically made these marks. And while I do not look for a deeper interpretation of these maps, it still made me think about how I use marks and writing in my books.

I have been using illegible or hard to read text from early on. I think “Unborn Thoughts I+II“, two books that I made in 2008 was the first project where I consciously and deliberately used a coding system. It vaguely resembles devanagari writing just because I think that this horizontal bar with the curls and curves above and below have a very interesting visual quality that combines feelings of constrain and freedom.

I decided to write in code because I didn’t want to see in writing what I wrote down there. Not to keep it secret – I didn’t want to read it myself. That’s where the title came from, too: It was a tentative way of thinking, of chewing on possibilities that I wanted to try before really thinking them. Putting them into writing would have felt too much like giving them substance.

Shortly after these works I made two books in an attempt to learn how to bind the earlierst Copic bindings, and wrote both those books in code. For one of them I reused the writing system of Unborn Thoughts:

And for the other one I developed a new one that could be stamped using a wood chip:

In this case I was open about what text it contained: Both have an excerpt of the gospel of Thomas in them. I even exhibited the code together with the second book. So why use code in the first place? – I thought about the history of finding the codices near Nag Hammadi. And from there I thought about finding archaeological books as such. How exciting to find a book maybe even in a language you didn’t know before! I wanted to recreate some of this excitement for my readers.

I have used this first writing code every now and then in my books, either for the first, or the second reason. For example in these works that I called “frozen” which were also rather personal in nature.

I have also used ASCII and morse code in books, most recently in the dot dash alphabet book 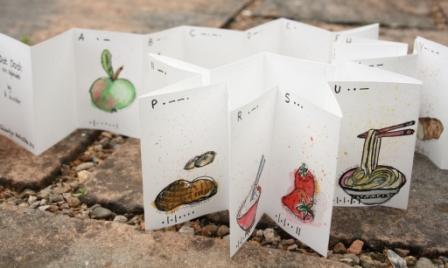 And for the various versions of Erased I wrote in normal English but then made it illegible by crossing the text out.

In addition to using code, I also use fake-writing in various places, mostly it just appears in my sketchbooks but also in some of my messages in bottles, for example these here:

These here are some pages from my sketchbook:

For these I find it much harder to say why I am doing it. These wordless writings spring from a wordless part of me, I suppose. I want to say something that I can’t. They are meditation. Sometimes I fill several pages with this free writing. Some inner urge keeps my hand in motion while I feel unable to formulate what exactly it is I want to say.

As this kind of writing surfaced in my maps, I started to think about its role as part of my practise more systematically. In a way, I always knew of course, and in my current artist statement it is mentioned in first position. But my perspective shifted a little, and I realised what a central part of my practise this is; but I am still pondering it, I have not yet fully grasped what it is that I am doing there:

In a way, I think, the maps do the same thing as the fake writing: These are not really landscapes I am drawing, not even inner or imagined landscapes – although sometimes these maps come with a fragment of a story, or an intended message. In their core, these are not imaginary but fake maps, made to resemble maps without mapping anything that exists. Just like the fake writing mimmicks real writing. Both convey more feeling and atmosphere than formulated thoughts and researched, intellecutally accessible meaning.

I do want to generate a certain feeling when I feature fake writing in art pieces. But more than that I want to investigate the mystery of what writing and skript is, without this autmatic “seeing = knowing” relationship. I cannot look at the letters “c-a-r” without an inner image of a car popping up immediately. This imagined car seems to almost block my perception of the marks on the paper. But in not being able to decipher the letters maybe the wonder and magic of when we are able to becomes visible; – an automatism disturbed and thus made obvious.

Maps are such powerful tools to convey knowledge and provide orientation. In their own way they are at least as powerful as writing, if not more so. This, at its core, is why I love them: Because they are able to communicate so much with just a few lines on paper. If you think about it, this really is like magic!

While I was pondering all this, I thought I should look for some critical context and read up on what others do and why they might use obscured writing.
M. mocked me, saying: “You don’t know why you do it, so you try to steal your reasons from someone else.”
But that’s not it. I feel I need some dialogue about the matter. So if you have used similar forms of writing, or simply enjoy it, I would appreciate if you could comment and let me know what you think of the matter.

In the meantime I looked for the silent form of dialogue that you can have with a distant author: literature. First trials lead to nowhere. I ended up finding coded art or treastises about font development.

After days of fruitless searches I stumbled across the keyword “asemic writing”. I heard this word used first in 2017 when Cheryl Penn send me the book on the left in exchange for my absences, but then I forgot. And now it’s like I dug a hole at an unspecific point in the ground and forth came a fountain. Surprisingly, the wikipedia article to which I linked above was one of the last places I went to (because I only googled that keyword relatively late), and I have not even found the time to follow all the links there.

The discovery that I am not alone in this reminds me a lot to when I found out about book art: On the one hand I am so happy that there are more like me out there. I feel like I found this new world that is waiting for me to discover it. In the last couple of days I have already seen so many inspiring examples of asemic calligraphy and writing that I am beginning to feel overwhelmed. And I am also a little bit disappointed that I was so ignorant about this communitiy, while feeling innovative in what I was doing.

Instead of talking on about asemic writing and about what I found out so far, I’ll leave you with the above link to Wikipedia which seems like a really good place to start if you want to know more. I am just dipping my toes into that ocean, and fear that whatever I would say now would seem stupid to me in a week. If this will accompany for a while – and it looks like this for now – then you’ll hear about this again soon enough. Instead I’ll finish this blogpost with my literature list for Febuary (some of the books new on my book shelf; I usually leave out belletristic unless I think it’s relevant to my art practise). I list the books as they come to my mind and hands, i.e. in no particular order.