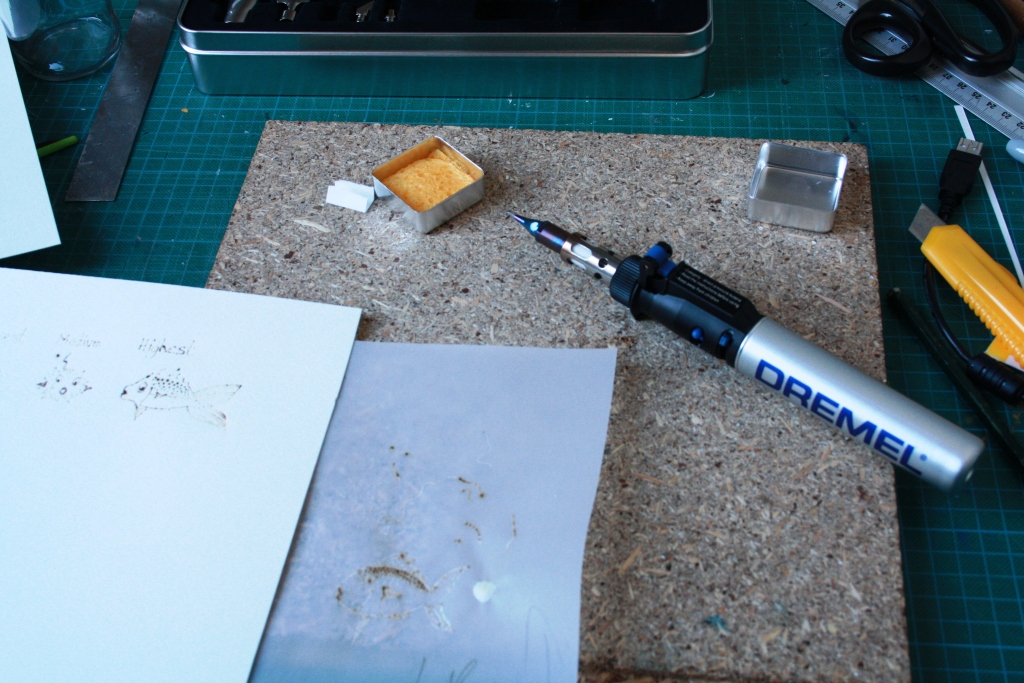 Well, I really should be working on other things, namley on the completion of 346. So I just gave it a quick go – and rather like the outcome of this first test.

I first tried it on the thick parchment paper which I used to make to touch and to cut. When the tip moves quickly and/or isn’t too hot, it makes a faint uncoloured mark where the paper, or probably the size is melting a little. Of course it is also possible to burn through the paper. The round blob behind the fish in the image there is where hot hair that leaves through a hole in the tip melted the paper. – I had not even been aware of that hole when I suddenly felt the paper curl and quickly pulled the pen away.

Here is a close-up of the fish at an angle – there is a three dimensionality to the burned paper that is not really captured well in the scan:

This trial was with student grade watercolour paper, and I am not as convinced in this case:

Well, obviously there is other media to try, and there are other tips contained in the box which might give interesting marks as well. What I am a bit concerned about is that the tip seemed to change while I was working with it: like discolouring, but also the mark it made seemed different after a while, and when I turned the tip a bit in my finger it changed back to before. – I do hope that this unorthodox usage doesn’t hurt it. But I can’t think of why and how it could possibly be harmful it.

This year’s “we love your books” theme is dot/dash. Mhm…