I have been slacking in finishing the scolls and boxes for my 346 edition. I had set myself so many deadlines already, and missed most of them. I did make my own deadline that allowed me to send the first copy off to the SoB show to London and that gave me a bit of forward movement. But now that the end seems closer than ever before, I felt myself extremely weary of carrying on. But I am still making progress, even if it is in increasingly smaller steps: 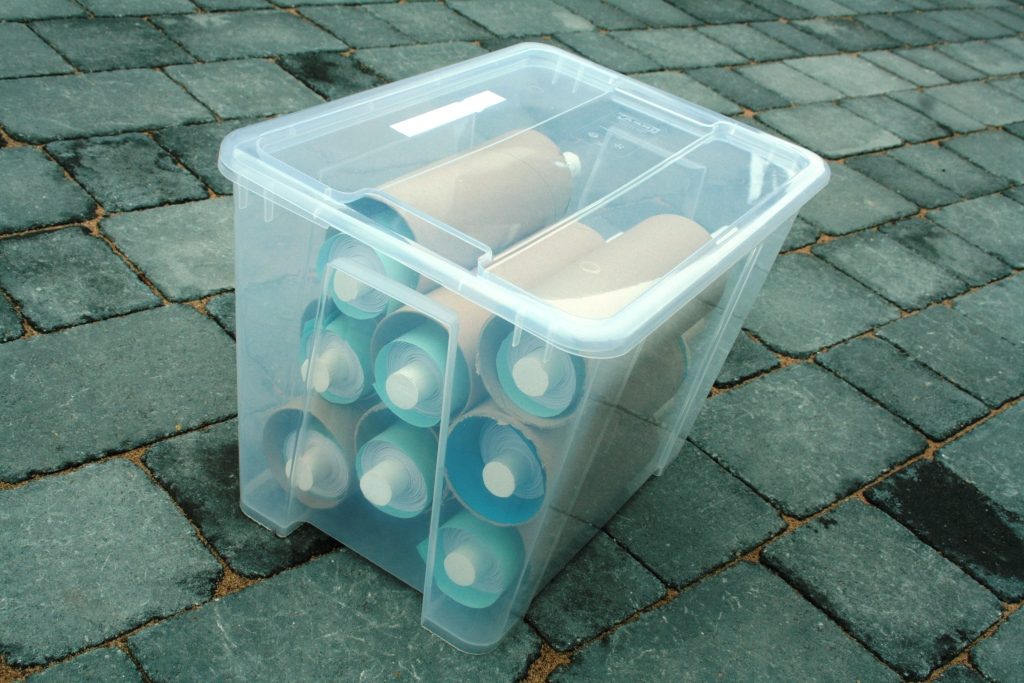 After printing all the scrolls, I first cut pieces of cardboard tube which will eventually become the casing for the scrolls. For now, however, they have no caps and no cover. Still it protects the scrolls while they are waiting for me to finish the boxes for them. So, Boxes. For this edition I’ll need a bunch. The plan is that this will be an edition of 10, the first two numbers being a bit different from the rest. First of all, these come with a model of the hospital room No. 346 where almost everything in the book takes place. Also they are printed slightly larger and on handmade paper (the remaining 8 are also on washi but a more economic version). So for the first two I need a large box which also incorporates the model, whereas for the remaining 8 I need something substantially smaller. Let me first show you and analyse the box for copy number one which I already finished in June. 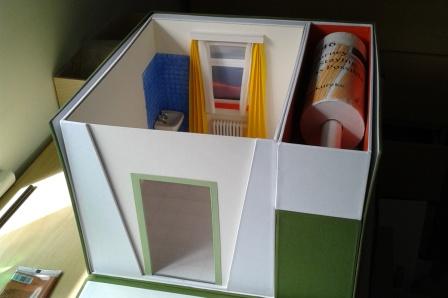 The above photo was taken before I send it off for the SoB exhibition in London. The model and the white tray in which the scroll sits are both removable from the box.
Below you see how they come apart. 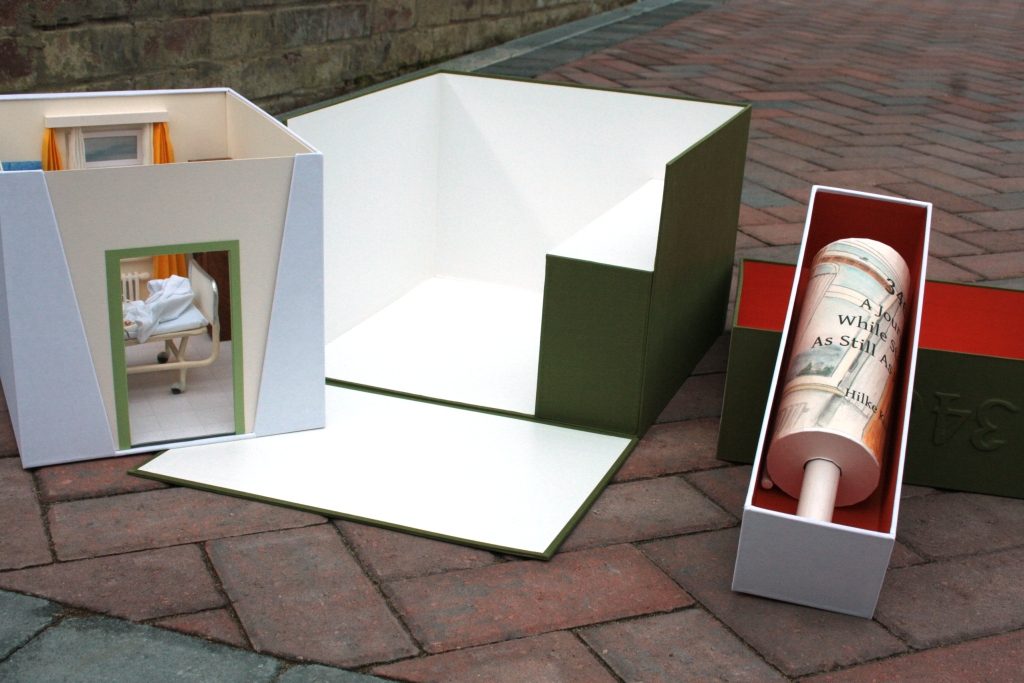 I can’t completely recall why I made it this way. I guess, in a way, I always thought of the scroll and the model as two things that have to come together in this bigger box. – But there is really no need for these two to come apart. The scroll obviously has to come out, but the tray? Not so much. Fixing the tray to the larger box saves some covering matering (and time spent covering it) but most of all it actually enhances the structural stability of the large box. As almost everything, I am learning boxmaking from trial and error. And this being my first really big project, it should come as a surprise that there are some errors: The large box has one big structural weakness: 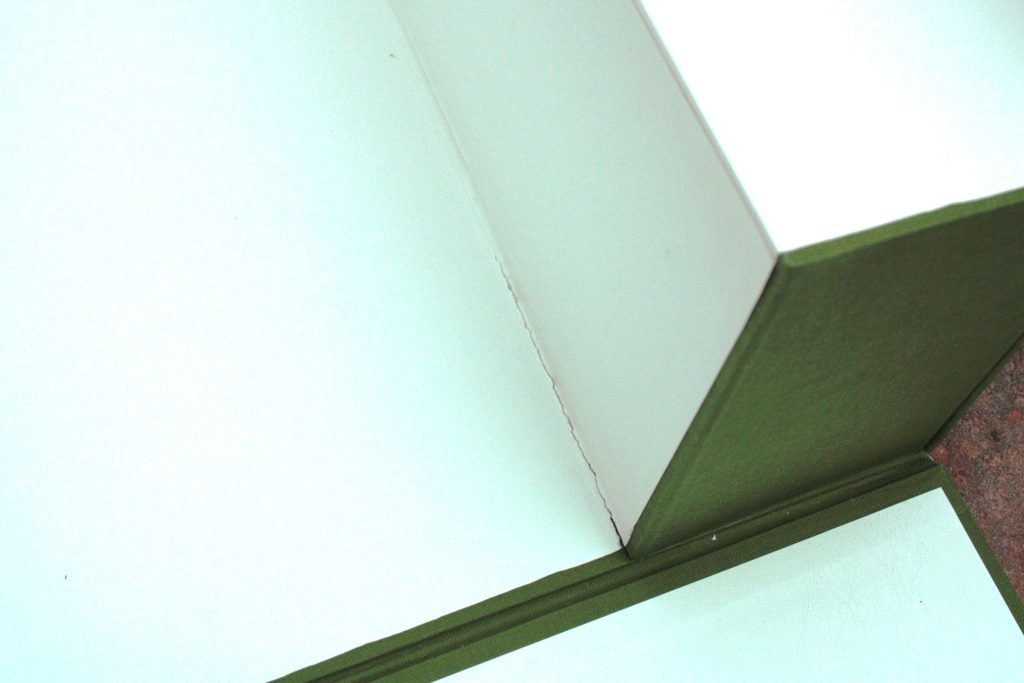 You can see in the picture above how the covering material (a white pvc covered paper) is torn. Well now this is due to several mistakes. First of all let’s see how I constructed the box: 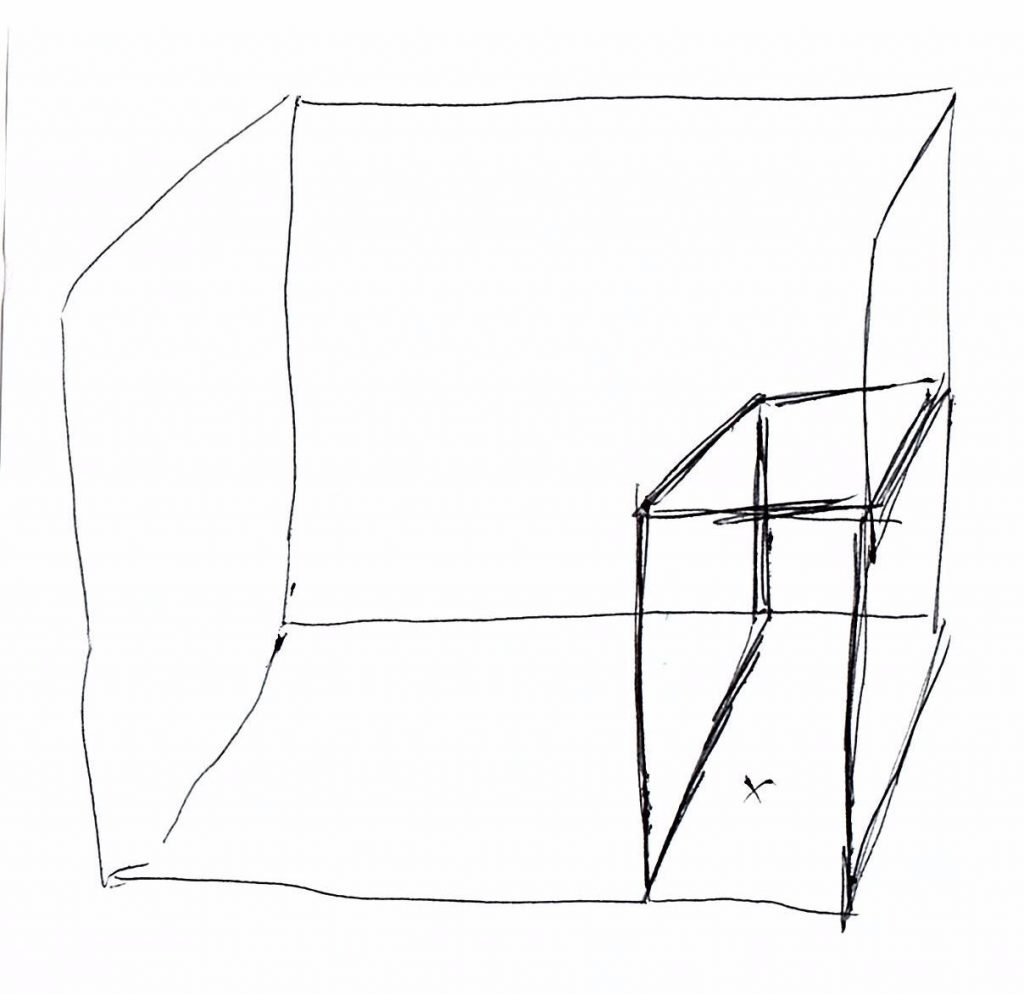 This inset with a green frontwas constructed just like the white tray above, with just five sides and an open bottom. If it had a bottom wall, I could have applied a larger area of glue to hold it in the larger box, and less force would have acted on the lining paper there, making it less likely to break. But also, had the model been glued into place, it would have provided an anchor between the bottom the large side and this smaller ledge (and it would have hidden the offensive crack).
So as a way of fixing this first (exhibition) copy, I am thinking of maybe just gluing the model into place (and probably the smaller tray as well, because I just can’t see any use of it being removable from the bigger box.

And what am I going to do for copy No. 2? – I am not completely sure yet, I suppose I’ll also put everything firmly into the one big box.

What I am currently making are the smaller boxes for the remaining 8 scrolls. Those will be very similar to the white tray for the scroll in this larger box. (That was probably one major reason why this was removable, because I thought of it as a thing that I would use for the smaller boxes – or put into the larger box.)
Originally I learned from Franz Zeier (Schachtel, Mappe, Bucheinband – I believe an English translation exists.) to make boxes by making shallow cuts (through about 1/2 of the width of the board) and then fold the sides of the box over. But using millboard for these, I didn’t think this was suitable. Also, the corners, I think, look better in boxes contructed from individually cut sides. And so for each box I am cut a piece of the bottom, and the four sides. I then glued them together with the long sides outside the bottom (as opposed to on top) and the small side capping this off:

Afterwards they need sanding off of all the edges, as the board placement isn’t always as acurate as I would wish. Sanding is boring and another self-imposed deadline when I would have finished with it has already passed. The general plan is to cover them with white fabric and line them with orange efalin, then make a top for the box in teh same manner (just slightly larger). Then I’ll need to finish the raw construction of the scroll-cases, print the covers and glue those on, and will be finished. I wonder whether I can manage before Christmas.

Oh, and I also need to print copy No. 2 and start all over. – Or maybe I’ll start this some time after making the smaller boxes and finishing the scrolls. I’ll see. – Much work still to do.