Winter has come, and I am getting more and more used to the English winters, it seems, because today I thought it was so terribly cold, and so very wintery that it is time for mulled wine and mince pies. – However, it was still 10°C, and that’s +10, not -10. I can’t really imagine anymore, how I lived through weeks of minus temperatures in Leipzig. 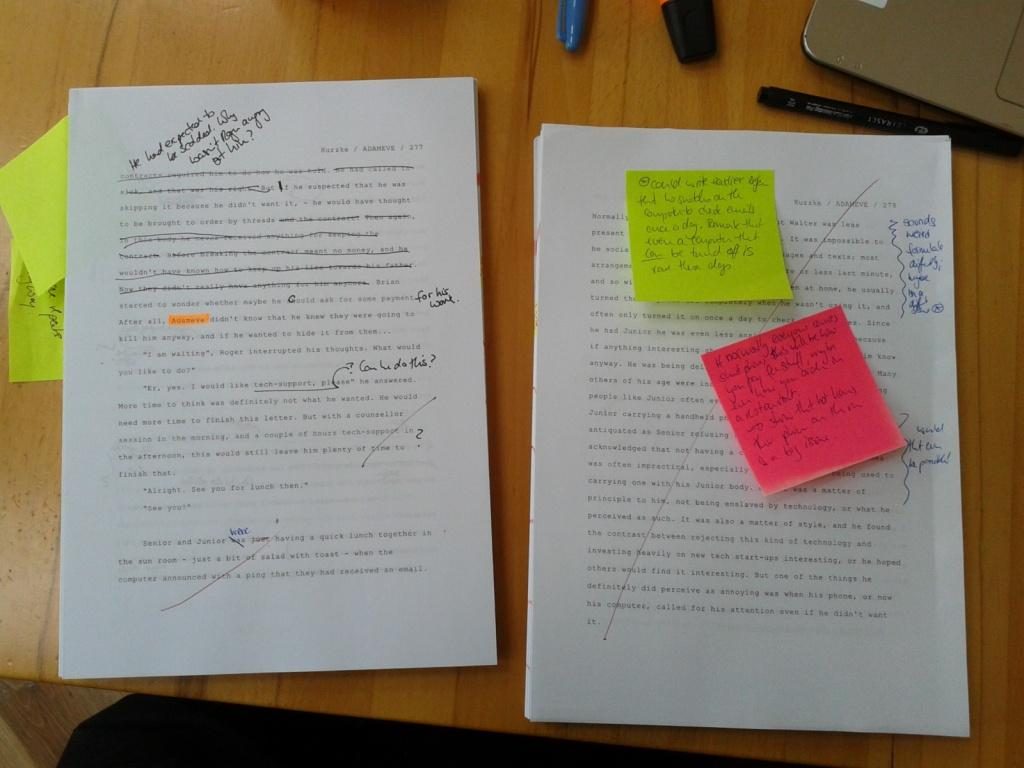 The cold weather makes staying in the warm house to write (I moved from the conservatory into our much warmer library). I like to think I am making good progress on the novel, but I should probably also say that I started over from scratch last month because that seemed easier than trying to fix it. In September I printed it all out, and I nearly managed to read it, but it was incredibly awful. I hope it will be all better this time around, we’ll see.

Here’s a quick update on what’s going on with other projects:

I made a couple of new women with hat prints in the last couple of months, and thus decided to wrap it all up and make a little booklet that includes them all:

I am really happy with how this came out. The structure of the booklet is completely non-adhesive. There is a folded concertina from Kraft paper where the lower lip has been folded upwards, so that it forms pouches for the bookmarks to sit in. So the bookmarks can stay in the booklet and be enjoyed together, or they can be taken out to be actually used.

For the bookmarks I chose six stamps; what unites them is that they have almost the same format, and they all have been cut into soft lino – and of course they all show women sporting different hats. Other than that I like to think that they are varied and show different technique and style. Oh, and there’s a seventh print featured on the cover of the bookletbut that lady with hat has been cut into traditional (hard) linoleum.

It is available for just under £10 on Etsy.

Like all editioning this was a rollercoaster. I started with the idea on a Sunday morning while cooking paste to further my 346 edition (more about that in a minute). Then I figured, I’d make the cover quickly, while the paste would cool down. Of course I have done nothing else but print, fold, cut, and print until Wednesday evening, and I spent the Thursday on making photos. 20 had seemed like a modest amount on Sunday, I made 22 to make up for potential failures, and then decided to leave them all in, so it’s an edition of 22 now. Half way through I was cursing myself and my love of editions. There’s something beautiful to seeing them all side by side. And then 22 doesn’t seem so much. But when you are signing your name 88 times (on three of the bookmarks and the cover) and write your webaddress 132 or such times, that has the ability to wear you down.

There are some news about my 346 project, too. It is hardly noticible but it’s there. One of my problems is that I convinced myself that I need larger chunks of time to finish the edition than three hours or such. Just so that it doesn’t drag on forever. But I hardly ever have larger chunks than 3h. And so progress is not very physical. Also I am going to participate in a brief (3h for the irony of it) Christmas market at Backlit in Nottingham, and thus feel like I need to finish some fresher things. The Women With Hat edition was one of them, I have an idea for my fish-project, too. We’ll see whether I can manage to finish that in the next two weeks. That would be nice…

Anyway: I did work a little on the project and some of it can be seen online. That’s because the work I did is mainly descriptive and mental: I wrote a series of blog posts about the project here: on the a-n website. I made some new photos for it, and the last blogpost is the first where I actually published some excerpts of the text. – I hope you’ll like it!

2 replies on “Winter is here”