Mostly for medical reasons (but also because the kids now are on summer holidays) I have been grounded in the house, and couldn’t fly to any heights in my studio.

So mostly, I have been writing (in preparation for the next school term in which I am going to teach German to bilingual 7 and 8 year olds) for a role-playing I am going to do with them. And of course I had time for crochet. 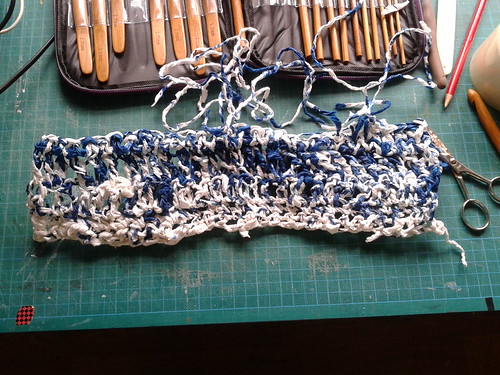 Some of you might remember that I made a ball of paper yarn myself – rather crudely from cut-off deckle, and then partly dyed it with ink and water. Other than I first throught I would, I decided to make it a rectangular piece of crochet simply because the different thicknesses and a general fragile thread made other things too hard. I was a bit disappointed by how the thread looked – pretty much like any varigated thread. But all in all I think I’m hooked, and I’ll try to make more evenly thick thread by using discarted prints rather than the deckle (I have enough of those after printing the 8 scrolls for 346).

A couple of days later, I decided to use some left over thread pieces to elevate the paper rectangle to something tubular. No idea what it is yet, or what could become of this, but it is feeling right, and I want to explore it a little further. 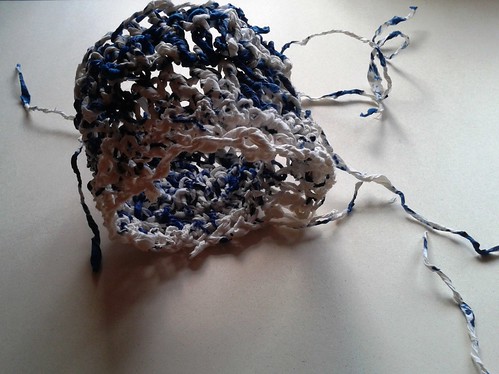 Speaking of 346 – a got a bit further in making the boxes and scrolls, but not much. I had to “take it slow” these past weeks, and standing for longer times, cutting millboard, didn’t really feel that good. 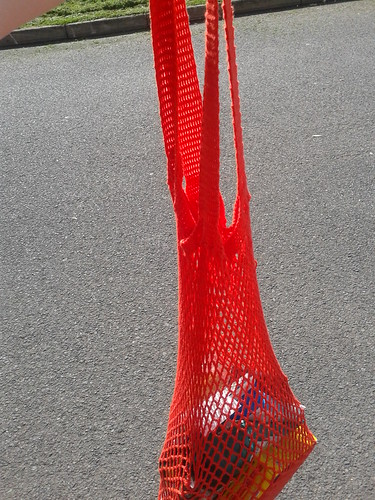 I also engaged in other crochet projects. I decided to make a “super stretchy shopper”, a shopping bag which, according to the picture, would hold maybe three bell peppers and a kale. I made the body of the bag completely according to instructions, yet it became gigantic! M. thinks it could be good as a bag for balls, as it is indeed super stretchy, but this is not something you really want for your shopping. On the left you see a photo from when I actually used it to put my shopping in. Well, the heaviest things, like a bottle of milk was left out.

And last but not least I managed to progress a little on the print I started already in July and showed you in my last blogpost. 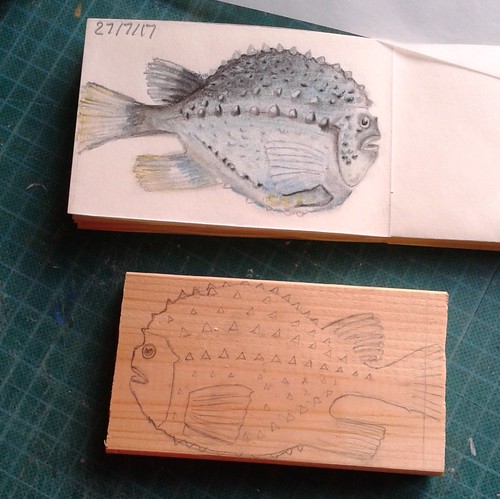 If you follow me on facebook you might have seen the fish drawing already. Today I transferred it to a wood block and then cut away. I intend for this to be a reduction cut, and this is just the first stage. I hope my registration will be good enough for what I have in mind (essentially two more stages). 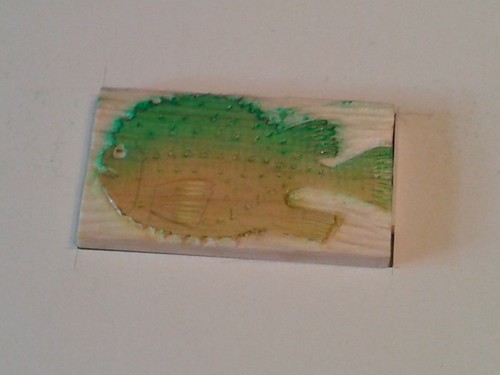 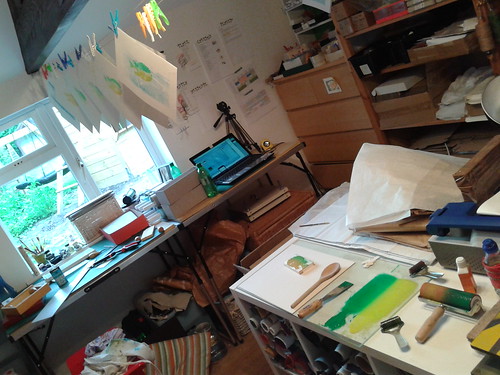