I already showed you the image on the left and mentioned that it is part of a new (old) project. It took me while to find the blog entry for when I started this, because it was already in 2009 and on my old blog. I can’t believe it has been sitting for so long in my studio. I always meant to continue working on it. The project never really left from a semi-conscious corner of my mind and so it really didn’t feel like three years ago.Well, I HAVE been busy. 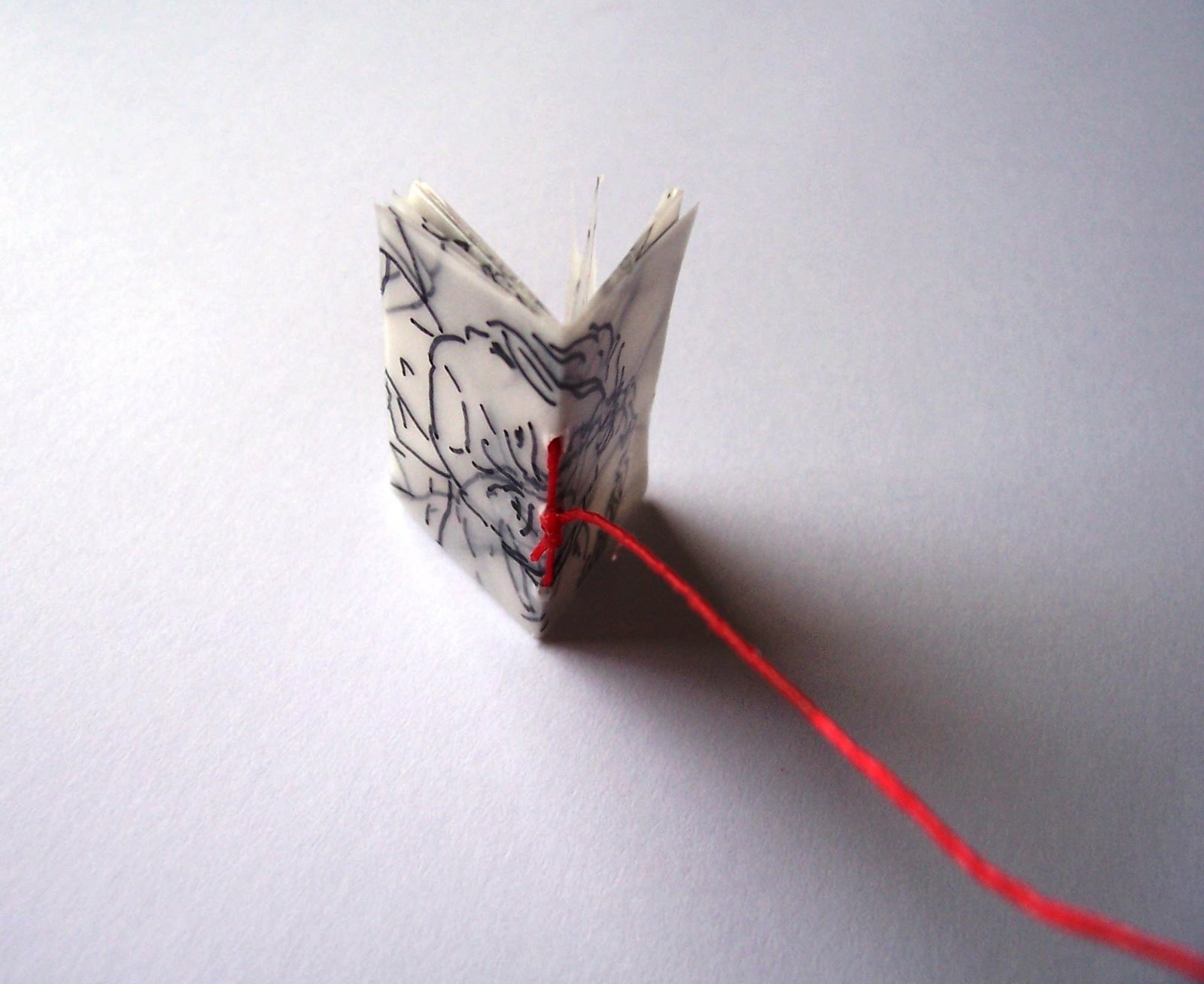 Looking back at the start was interesting to me. I had forgotten that the initial project had a different name than it has now. I don’t remember when its title changed in my mind. Initially it was baptized “falling to pieces”. The grief for my grandparents felt sharper and stung more than it does now. I needed a way to put that hurt on the outside, and I was cutting up photo tracings of them, bound them to small booklets and dipped them into wax.

Since then the project has shifted a little, and the working title is “frozen”. There are bits and pieces of a concept in my mind rather than a fully conclusive story:

– photos preserve a moment, action becomes static, it is a 2D slice of our 4D world. While I generally welcomed and welcome change in my life, there are also people that I am afraid of loosing, or whose lost I feel sad and moments I feel nostalgic about. And there is the wish to at least keep their memory fresh. Maybe by putting it in a deep freezer. Or dipping it in wax which is almost the same. (well,…)

– tracing the photos is interesting. I think it feels a bit like touching what is depicted, and so the process feels rather intimate to me. But I also learned how few the outlines change over time, my father’s father’s outline looks so much like my father, it is almost spooky.

– A hair can stand for a whole person. Hair is part of ritual magic lore, being used for spells; a knight might ask for a lock if his beloved; it is part of criminal literature with the (wrong) tale that you could determine one’s complete DNA from a hair that is maybe left on the victim’s body.

This was a first trial this morning. I stitched the booklet’s first signature to the last so that it is a complete round and fanned the pages open so that more of it becomes visible. In the center this forms a small hollow in which a strand of my hair is lying. On the page I have this time not the tracing of a single photo but a whole collage, complete with some text about the person that is depicted.

It turns out, though, that very little of the content is visible. Although I tried to separate the pages, too few can be clearly seen. That which is visible sometimes just makes no sense in the small frame of a page. I don’t think even I could recognize who it is in the book after a while.

So I continued in a very different direction.

I slightly modified Hedi Kyle’s crown book structure (seen in the Penland Book of Handmade Books, and Alisa Golden’s Making Handmade Books) in such that I slid the back cover inside the front cover to form a full round (glued in with double-sided tape). Into the pockets thus formed came the different collaged pages. Each one (except one) consist of three stripes of parchment paper. These strips are put side by side and connected by filmoplast, one on the front and one on the back, and thus naturally fold in a concertina way. This folded piece is then put into the pocket. In front here you see one page about my grandparents (unintentionally I put it with the face down so that the script is mirrored, but I guess that doesn’t bother anyone here, hehe.)

I am pleased this approach since it makes it possible to see the whole image and read the text, but at the same time hides it from immediate access. However, this is obviously only a solution for showcasing, and I will have to go back and think about whether and how to make a storage box for it. Also, the strips of filmoplast show through and I don’t really like that. I already thought of lining the complete back with it to stop this effect.

On the other hand, looking at the trials with some distance I do like the hair attached to the book, and the wax. Maybe if the individual images were a little smaller, or the book itself a little larger…

(edit: originally here was a gallery of more images, but they didn’t survive the blog move.)