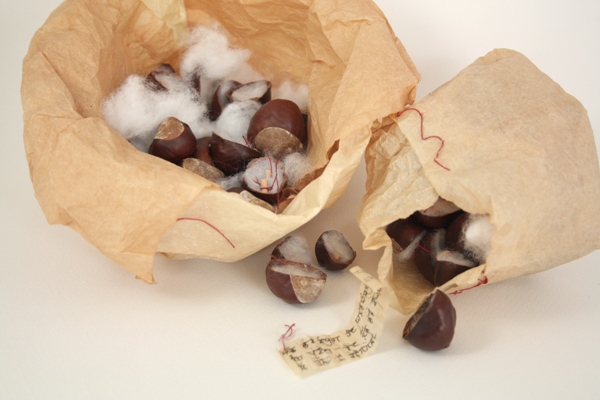 Unborn thoughts I is a nest, unborn thoughts II a sack, both sewn out of tea dyed parchment paper. These containers are filled with cotton wool and chestnut shells which contain, like seeds, tiny parchment paper scrolls.
This book comes from the time shortly before I decided to found Büchertiger as a business. It was a time of change and insecurity, both professionally and personally. Each of the scroll contains one thought. Or rather a seed of a thought, an attempt at thinking, trying out whether they could become my thoughts and my thinking. Some of them are contradicting, most of them I wouldn’t want to speak – because they were not my thoughts, they were just thought seedlings. Thus they are written in a secret skript I developed for this book and later used for several other works. It seemed to me that if someone takes the time to decipher their meaning, they would be loving enough to understand what these lines mean.

price: £290 each (contact me if you want to purchase one or both)