Oh dear, I am very late with the webfinds wednesday for March. Aehem, I thought I had scheduled a post, but apparently I didn’t. You’ll find it below. Before I give you links to beautiful books, let me lament and wail a little about how awful things currently are.

To start off, my back pain is back. I have been holding it at bay since last autumn with daily yoga and physio exercises. In the last weeks so many things have been happening, that I slacked more and more. While I continued my physio excercises (which don’t amount to much, to be honest), I have not done my yoga in more than three weeks. The back pain always lingered, tamed and hardly noticible at times, but always present. And now it is back full flash. – Not a good idea when I really should be packing and schlepping boxes. 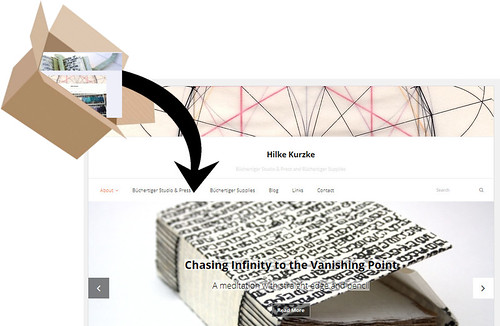 As some of you might have noticed, I no longer maintain the buechertiger.de webspace, instead there is just a redirect to kurzke.co.uk now. When I imported the blog from there to here, I was asked by wordpress whether I also wanted to import the pictures, and I said “yes!”. It all worked like a breeze. A all seemed a bit to quick and a bit too good to be true, to be honest. And now I realize why: The images never have been imported, they remained on the old server, and therefore now older blogpost don’t have images anymore. Sorry about that, I guess that cannot be helped. I guess I could deactivate the redirekt for the time it suffices to actually copy all images over to here by hand. – But I don’t really want to work through years of blogging. So on retro-perspective I am thankful for the glitch wordpress had for a while which forced me to put up all my images on ipernity instead. – Those are of course all still there. Should serve as a lesson for future blogging.

And then, yesterday evening (well, that would be three days ago when this post becomes live), I suddenly was unable to log in to my admin account here. It was not a matter of a lost password, I still don’t know what was the problem. It was solved while I was sleeping by the support team of my host. – By deleting my account and creating a new one. Which means that all blogposts until now are now “without author”. And other minor things that still bug me much too much for my own sanity.

The refurbishment of the house is slowly progressing. First craftsmen are actually working there – although some will be on vacation soon again. Currently it looks awful, with the flooring gone, and all the messy stuff exposed. – And all the patchy work that was done by the previous owners probably in a DIY and “when it is hidden, it doesn’t matter how it looks like” manner. The best feature, I think, is a socket in a wall which used to be hidden behind a kitchen unit. In it is a plug, and the cable vanishes through a hole in the wall to god knows where. – An electrician will take a look at the house on Thursday. To be honest, it does not look like everything is safe there.

Tomorrow (that will have been at least two days ago when you read this) we’ll plan our kitchen with someone who calls himself a kitchen designer – but really just is a salesman, and hopefully finally will find someone to install it for us. We would like to move in May, but it looks like no-one can install the kitchen for us before end of June. So maybe we’ll just go for a self-installed IKEA kitchen instead. We’ll see. And then there ist the decorator. Matthias and I today went in together to talk about how to paint the walls, and what kind of style we want, and it turns out we agree on that it is really difficult, and that we feel completely overwhelmed by the plethora of details to decide on, and the hundreds of workers to organize. But that is kind of all we were able to agree on. While I kept wailing about not having been more determined when I asked months ago for to hire an interior designer and Matthias thought we could manage all on our own. While Matthias kept yelling that talking about what we *should* have done doesn’t help and we need to tell the man how to paint the walls. I do have to say he is right on that detail. However, I can’t see how it follows that everything should be painted bone-white. “I want colours!”, I exclaimed. Well, at some point I had to take a stroll (a slow one because I can hardly walk with my back hurting as it is) through our admittedly beautiful garden to not just burst into tears.

Oh, and then there’s the outhouse which will be my studio. I still have to decide about how to damp-proof it, and how many thousands of pounds I want to spend on it. And I still don’t really know what to do about the floor. And where and whether to put in an additional window. What I am looking forward to is buying and painting the new door. I think I want it red. Or black? Maybe when I see my red door I want to paint it black? – No, now I am just joking. I think I’ll go for a bright colour. Maybe then I can switch from Büchertiger to Green Door Studio & Press or something like that.

edit: Since I wrote the first version of this post there was actually some progress on that front: I went for the expensive version regarding damp-proofing and in favour of a window. I will actually sketch on the wall where I want it to be. – I hope that will work out! On the other hand I won’t buy a new door since this old door has a non-standart measurement, and isn’t bad enough to warrend a handmade door. But I’ll paint it. green, or maybe blue? Mhm…

It is all just awful. I had imagined planning a house more fun. Currently it is all just a mess, and it feels like we are messing everything up. But, on a good note, I did read from 346 last week on the April Social of the Nottingham Writer’s Studio. It was for some also an introduction to book arts. People asked me for example whether people will be able to buy the book, and I said “yes, I might make 10 copies or so which then will be for sale through me and specialized vendors”. And they were amazed by the fact that it would have such a small edition size, and told me I should at least put it online for others to read. Which felt good, I take it as a compliment and that they found the bit I read intriguing. But I received little understanding when I told them that I am not convinced that it will work as online, and that I am quite happy without a large edition. Generally I was rather happy with the reactions I got, though. People reacted really well to the scroll and apparently found the whole project interesting.

And now, finally, the Webfinds for March. Or let me count them for April, o.k.? I guess the majority of you have already seen online exhibitions. Of course, we all have. Sometimes it is nice to be reminded, that many of them actually stay online for a long time, and there are some beautiful examples that are late a second visit.

There are many more out there, of course. Take a look at this list created by Peter Verheyen on Philobiblon to keep browsing if you got the time.

One reply on “Belated Webfinds Wednesday: Artist Book Exhibitions Online, and a general update on website, health, and state of the move”