Yesterday the twins went back to school, and I have the morning to myself and for my art again. I was looking forward to some me-time, and imagined setting right to work. But I find I struggle to settle back into routine more than I thought I would. But maybe that is no utter surprise. So instead, I find myself blogging and retelling the stories of the summer:

It was the night before we left for Germany, it was raining cats and dogs, and we were packing suitcases: We were going to put all our luggage into the car on the night before leaving, but it was just too wet for that, and also getting really late. It was nearing 9pm and I was still putting together bits and bops from all over the house. So when I went into my studio, I don’t remember now whether it was to fetch a minor item, or just to check on things once more before locking the door for good, I stepped into a puddle in the dark. I switched on the light, and realized that the whole room was flooded, about 1 or 2 cm deep in water all around. Argh! M. and I spent the next two hours bailing out water, exactly what you want to do before going on a holiday!, and the next morning I continued with blow-drying some of my stuff. Luckily less items were damaged than it first looked.
All the time while we were away, I was a little afraid of how it might look like when I come back. I don’t really understand how it could have happened in the first place, since I took great care to make the room water proof when I first turned it into my studio. Tidying up and re-arranging my studio was the first thing to do when I returned. I ought to get going on “real work” now, but somehow…

On the day that we left for Germany, I received notice that they had sent back my exhibition copy of 346 and it was due to arrive back on my doorstep that very same day. This was a huge box, I was worried they would send it back to London if I wasn’t here, not sure whether there would be someone there to accept it, feared it might get lost on the way of being sent back and worth. I also didn’t want to bother a neighbour with having to keep that large chunk of a thing for two weeks! We waited as long as we could but it didn’t arrive before we really had to lock the house.

When we returned it turned out that I was able to retrieve the package savely, not from the neighbour where it was originally left with, but from another neighbour, since in the meantime he himself had left for a holiday. I am planning to drop him one of my current prints in the letterbox as soon as I manage to finish my fish print. (Note to self, musn’t forget!)

So the secod thing I did was to unpack the book, hoping it hadn’t suffered too much. On first sight it looked good. My unpacking and re-packing instructions were still there, with a thank-you note “these have been really helpful”, which I thought was nice and encouraging.

They had decided to pack the peanuts which I had originally put ouside the box, inside the model. That was why the cardboard box had been squashed, the box inside seemed totally fine.

So I started to carefully empty out all the packaging material, to find the hospital room looking like this:

Turned over furniture, the nightstand broken, ripped off picture frame on the wall, all the furniture which should have been glued down, shifted… Someone must have had a serious party in there. 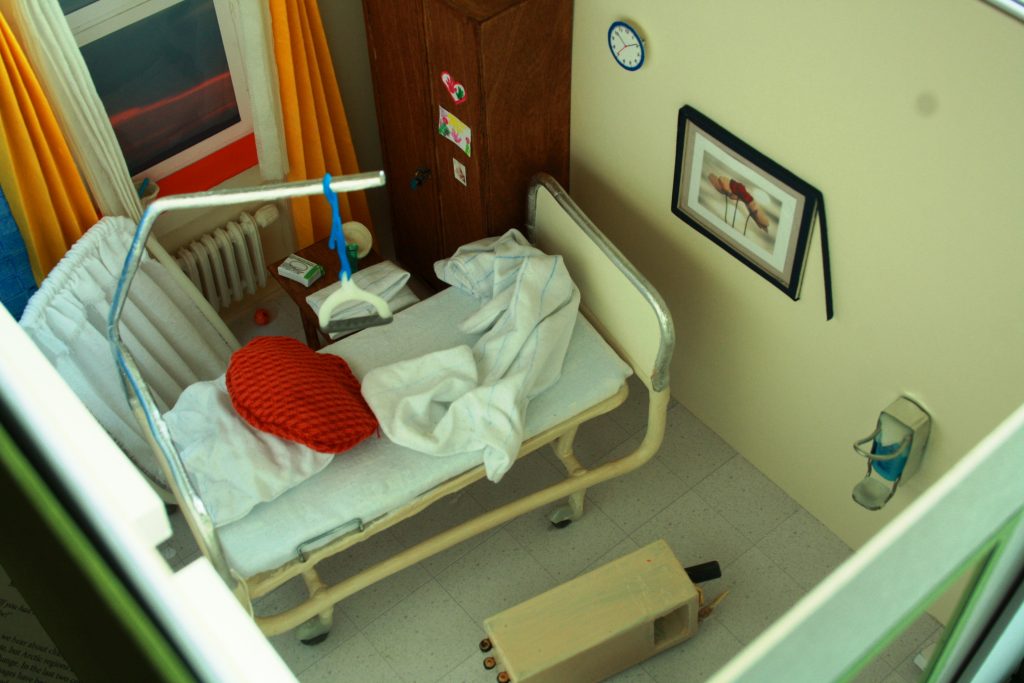 It cost me some nerves to think about it, and I took a while to think hard before setting to work. I thought I might have to redo the basic room as the falling and shifting furniture had done some damage to the floor, and I wasn’t entirely sure I could fix it. But I also didn’t feel like re-doing the whole construction, window and radiator, and all.

Looking at the image in the exhibition catalogue, it must have been damage that was incured during unpacking. Apparently writing “Please remove bubble wrap carefully!” doesn’t suffice to indicate that you shouldn’t full on it such that the parts come out with it. But I book it rather as a packaging fault than anything else. I have to make sure I learn the right lessons from it before sending it the next time. For now I take from it that bubble wrap is not the way to go forward. Maybe peanuts would be better – many galleries don’t want peanuts, though. Will have to have a serious think about that when the time comes. 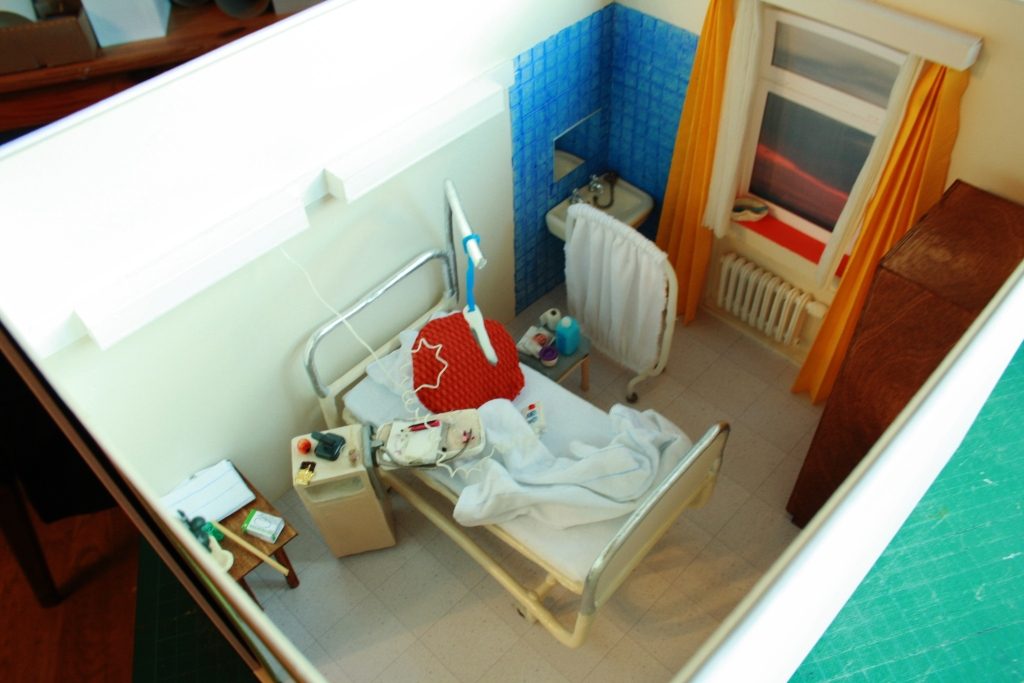 In the end the restauration worked well enough, I think.

The scroll luckily didn’t take any damage. Right in the beginning there is a crease, hardly noticable, which tells methat this is the position the scroll was when they exhibited it. I was a little bit disappointed that this meant that no-one had actually read any of it, or seen more than the first two illustrations or such.

And then I saw that the outer box took one bigger blow: Apparently it was not treated super-careful, and at the same time was structually not sound enough to stand the really very small abuse it must have taken to rip part of the box. Now I really should work on the rest of the edition, on copy 2 (also with a model) in particular, and just set to work. But somehow I just can’t seem to find a start.

Tomorrow I’ll start teaching in the German Saturday School. Fortunately my lesson for tomorrow is ready and planned and the rough outline for the whole term is there: I am going to sing a lot with them, and play a role playing game / theatre thing that I wrote during the summer called “Alexanda und der Zauberballon” (Alexandra and the magic balloon). I hope we are going to have a lot of fun and the kids will have a good chance to enjoy German language.

For this I of course needed to buy a new guitar. My other guitar has been handed down to me from my maternal grandmother through my Dad, so has a real family history, and I didn’t want to take it to a class of jumping and running 6-8 year olds! A good reason to revive my old hobby. I don’t know how long it has been since I last played the guitar and it is utter joy to do so again. I have been singing a lot with my own children during the summer to practise the songs and remember the chords – and of course because we enjoyed it. Actually they enjoyed it so much, they both

insisted that they wanted a guitar as well. I was too pleased by their interest to deny them their wish. But thought a guitar wouldn’t be an awfully good idea for them. Even if I bought a half sized instrument, I still couldn’t quite imagine that they had the strength and dexterity in the fingers needed to actually play it.

So I went for an ukulele. It has only five strings instead of six, the strings have less tension and are thus easier to hold down, the instrument is smaller. And most importantly: I always wanted to have a ukulele myself. – And it is so much fun! Essentially you see here the reason why I worked less than I could have in the past weeks: I had to learn to play the uke after all!

I have been really impressed by my son’s perseverance and will to learn to play, though. Maybe he’ll play after all.

And now I’m off, practising myself some more 🙂 And maybe soon, hopefully during next week, I’ll finish my current print (really looking forward to) and also finish editioning of 346 (looking forward to having it done, dreading the actual work). 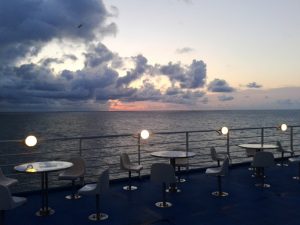 Oh, by the way, on other news.  I dropped some bottles during my summer, and you can read all about it on my other blog flaschentiger.wordpress.com

Have a nice few last days of summer before autumn gets you! 😉