It is the 10th of June today, the day of the deadline for this year’s International Bookbinding Competition by the Society of Bookbinders, and I filed my intention to enter 346 already in May. As you might know, my plan had been to finish this project before starting my novel writing in Febuary but I failed to finish in time. Although I didn’t work on it while the writing course was happening, I decided to enter my intent to enter in May. I still didn’t work awfully much on this project, assuming I would still have enough time to finish once the course comes to a close.

Then the first week of June was half term, our twin’s 6th birthday, little boy was poorly, and my parents came to visit. And then the second week of June was all I had left to finish, and little girl fell ill. Luckily I have the best husband and supportive partner ever. He had a huge pile of exams to mark, but did so sitting beside little girl and kept me in the studio for as long as I could. So here’s the results:

I already cut the pieces for the box before half term. A decent pile, and it turned out I didn’t use any of these, but one thing after the other. 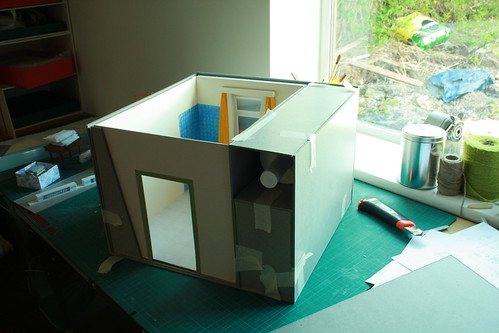 The first thing to do was to tape all pieces together before glueing, just to see that everything works well together; this was done before the half term. I wasn’t completely happy: Many parts seemed clumsy and just generally not very well thought through, several double walls and things like that. Also taking out the scroll like this seemed unelegant. Still I stuck with it for the time being, just because I felt I didn’t have the time to reconsider at this point.

Next I worked on the cover art for the scroll. Here’s the finished drawing on the book fabric: 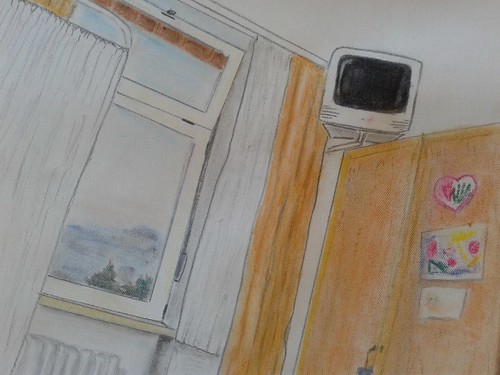 I was quite happy with it, the next problem that presented itself was: how to add the title. My initial idea was to make a stencil and then spray it on with acrylic spray paint. 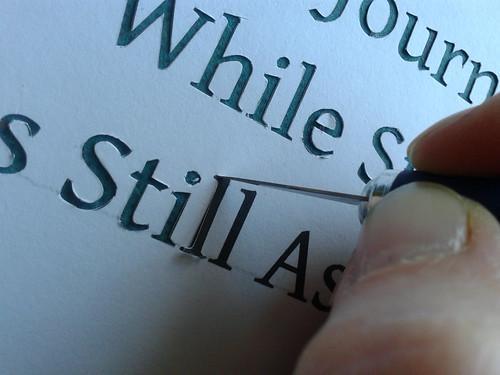 That worked quite well on the trials. And I made a second drawing on darker fabric, just to try it out. Then I added the spray painted title to that one first. It needed hand-drawing of the outlines, but I liked it.
The lighter fabric was buckling, though, because I had (stupidly) used water on it to smudge some of the pastel, and thus I couldn’t get the stencil to lay down properly. In the end I fed it through the inkjet printer instead. To my relief that worked well. So I was left with two covers, and the tough decision which one to use: 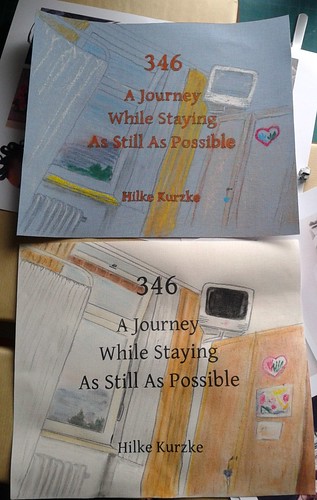 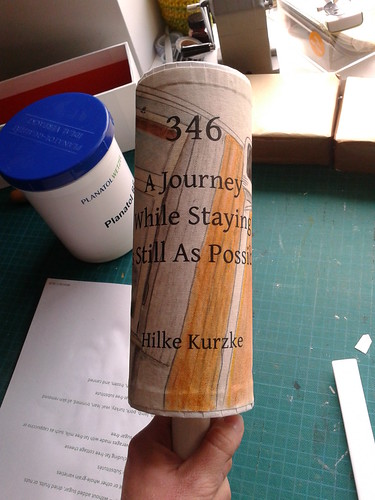 As you can see I ended up using the first on this scroll. 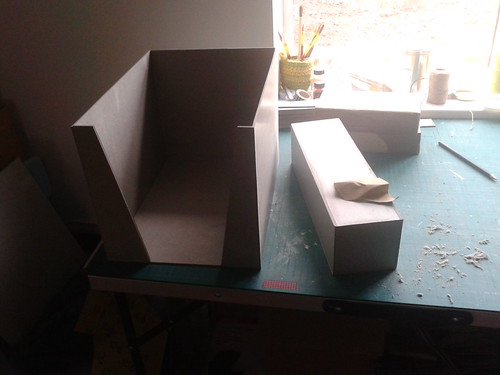 So the first thing to do after half term, was to look at the box(es) again. In my initial idea, the scroll could be removed from the large box, but the rest was fixed. Now instead I decided to solve one problem at a time, and make individual and removable boxes for both the model and the scroll. So it was cutting cardboard again, then glueing and then it was sanding, sanding, and sanding. I think I did nothing but sand boxes for three days. I wasn’t happy with the first box I made for the scroll, and thus started over. Then I sanded the box for the model some more. 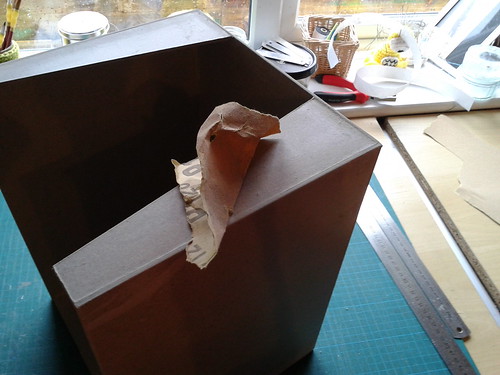 Finally it was time to glue the model into the case. This was a rather scary moment for me, I have to admit. I don’t know how I would have dealt with it going wrong at this stage. But it all worked out. 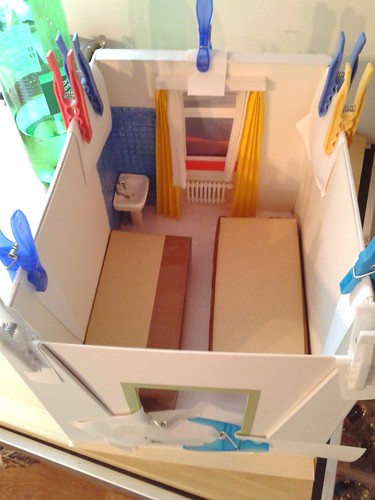 Here the model and the scroll are sitting inside a first trial for the new large box. 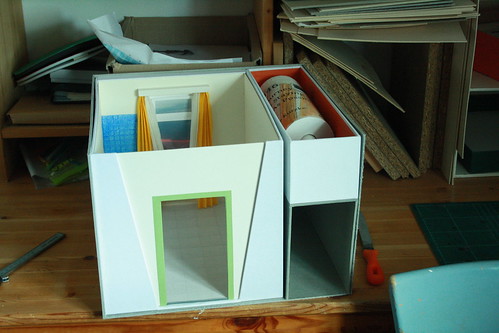 By now it was Wednesday June 7. The book was supposed to reach the Society of Bookbinders by Saturday June 10. If I mail items here as a “special delivery” they are guaranteed to arrive the next day. So the plan was to finish the box the next day, bring it in the mail on Friday, and have it in reach them on Saturday.
So the next day – after more sanding – I was ready to cover the big thing. It is lacking one wall (not really, it just will be added later as a drop-down wall), and thus needed support while I rub on the covering material: 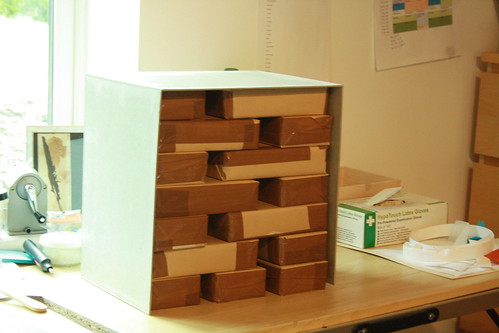 There it is all covered, ready to dry: 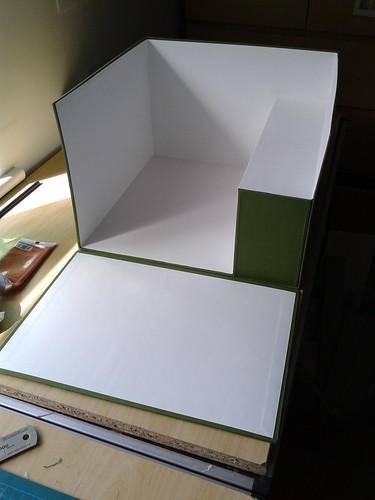 The hospital room was white, green, and orange, so these are the colours I kept to for the covering. Here it is with the model and the scroll put inside: 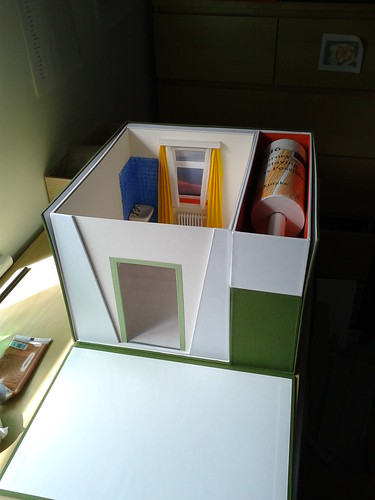 But of course there was more work to do: the top is still missing. So more cutting, assembling and gluing: 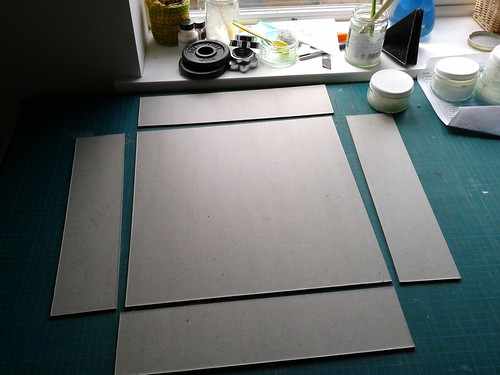 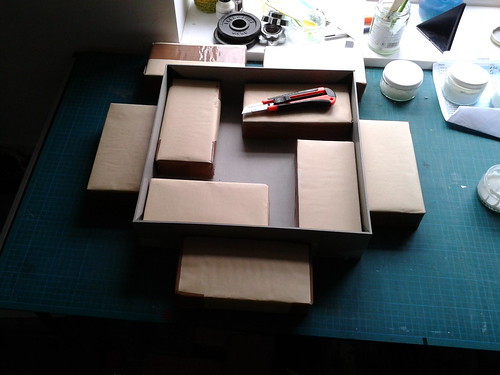 That was the moment when I took a rest and checked that Royal Mail indeed delivers on a Saturday. The answer: things are complicated, and I don’t want to bore you with the details. But it became clear I couldn’t send it from my local post office. More worryingly: I noticed I didn’t know where to send it to. I had not received a confirmation after my intent to enter, or at least I couldn’t find it. Also the top wasn’t covered yet and it began to look rather dire. But i could and would still finish, I decided. I wrote to the organisers of the competition who are great, and it turned out that my entry had indeed been overlooked, and if Saturday was difficult, I could also send it the beginning of the following week. – Phew! So back the next day, after a night of not sleeping due to feverish and rather pooly daughter:
On first trial it turned out that unfortunately the top turned out too tight. Too big and I might have been able to fix it. Too small and there’s nothing you can do but start over. So, I made a new top. Which also needed a title. Also I added some more details to the model. This is how it currently looks like: 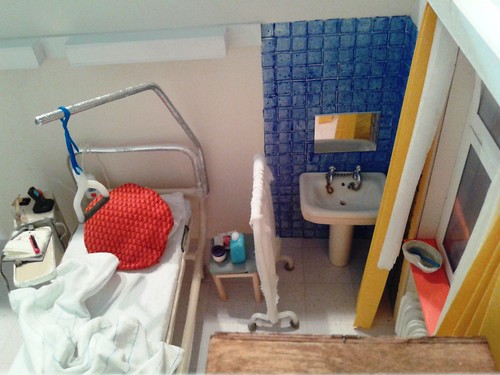 Note the mirror over the sink and the journal on the night stand. I also made a teeny tiny brush: 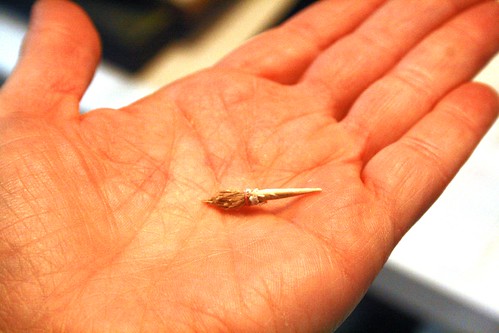 So as you now know, the book is still here with me. I have to admit, the top is not yet covered. But all the pieces are cut into shape, and this is what I intent to do tomorrow. Then I’ll have to get it ready for postal dispatch. – Another headache. And then, instead of being done, I should start all over and do it all again for the second model and scroll. But I’ll get there.

There are a couple of things I am taking from this.

A) Everything, really everything needs more time than first anticipated.

B) I need to calculate in more margin for mistakes for myself, both time- and material-wise.

The most striking realisation about this project for me, is how huge it is. The outer dimensions of the box are approximately 37cm x 37cm x 26cm. To make the box I used 5 large sheets of millboard, five sheets of PVA covered white paper, two meter of green and one meter of white covering fabric, three sheets of orange Efalin. I am running low on all supplies now. Even my glue is vanishing at an alarming rate. I’ll have to seriously stock up when this book is done.At the same time I have been working on miniatures for the model. I feel like there is something of each scale in this project.

Now please keep your fingers crossed for me that nothing goes wrong tomorrow, and I will finish this thing to send it off in time. – And then of course I’ll hope that it will appeal to the judges!